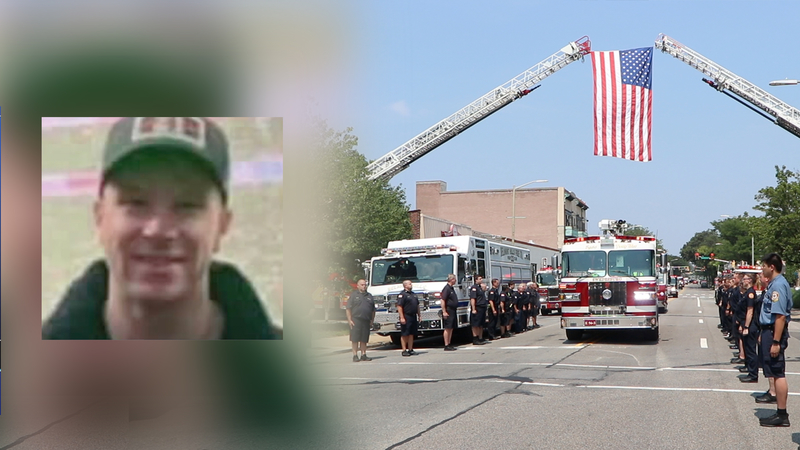 Volunteer firefighter Sean DeMuynck had enjoyed an Independence Day barbecue with his brigade earlier in the day. He planned to return to his home country to spend time with his family the following morning.

"We were all just thanking him for everything he had done before he left to go to Canada," said firefighter Aaron Abrams. "That was the last time, you know, obviously, that we were able to see Sean."

DeMuynck responded to a fire in Wynnewood around 10:34pm. Roughly a half-hour later, mayday was received. The 35-year-old had become unresponsive on the third floor of the structure and passed away at Lankenau Hospital after midnight.

"Sean gave the ultimate sacrifice. As a volunteer, he wasn't paid to do this," said Abrams. "He did this because he had a love and a passion to help his community. And I think that goes above and beyond what most people do."

A special police & fire escort paid tribute to DeMuynck's life and service this morning. A motorcade with more than a dozen fire trucks guided the firefighter to the funeral home.
They traveled beneath several ladder arches draped with waving American flags. Fellow firefighters provided detail and paid their respects.

"Like all families, we come together when something bad happens," said Brad Remick, President of Penn Wynne-Overbrook Hills Fire Company. "This is the worst thing I could imagine happening to a fire company."

Remick said Sean had impacted countless firefighters and changed the way they approached their mission.

"I'm sure he will be watching over us, kicking our butts when we're not working as hard as he did to become a better firefighter," said Remick.

Firefighters with Sean's brigade are planning more than just today's escort to remember the fallen hero.

"We have plans to build a makeshift memorial in his fire station, to keep his gear rack intact, and no one will ever use that space," said Chief Schmid. "It will be forever his and he will live on in our hearts."

Officials said Firefighter Sean W. DeMuynck was found unresponsive on the third floor of the home.