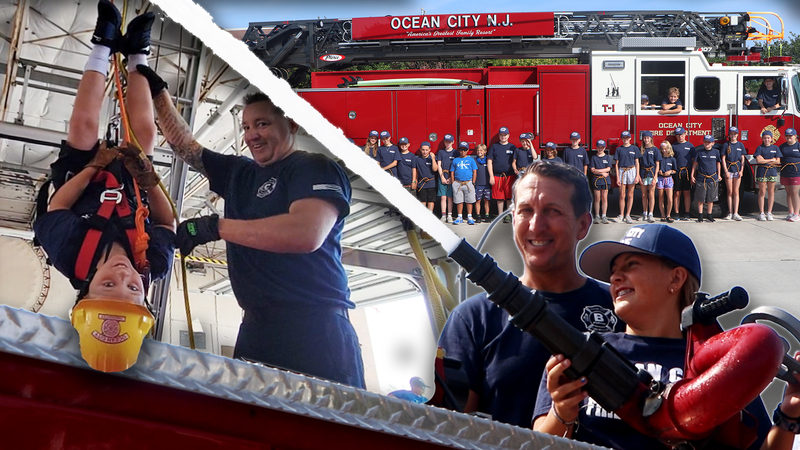 Kids step into the shoes of real firefighters at junior camp

OCEAN CITY, New Jersey (WPVI) -- "Everybody loves their job here and helping out the community and helping out people is paramount," said Bernie Walker, one of the deputy chiefs with the Ocean City Fire Department.

The island's first responders were motivated to create a Junior Firefighter Camp in 2008, which continued annually until the COVID-19 pandemic hit in 2020. But this year, the four-day-long training regimen came back with the full force of a fire hose.

"We learned how to tie knots and put on gear and go bring out victims," said 12-year-old Faelyn Clark.

30 kids like Clark also received lessons in CPR, learned the ropes of rappelling, and enjoyed rides in the fire truck.

Ocean City native Geoffrey Duffy was inspired by the camp as a child and went on to become a career firefighter with the department.

"I love helping the community and be there when people need you," he said.

Potentially following his footsteps is 12-year-old Alan Roehrig from Newtown Square, Pennsylvania, whose father and brother are both firefighters.

"I think I want to be a firefighter or I want to be some part of the emergency services," he said. "I just feel like it's cool and I feel like I can help people out in the world."

Roehrig was one among the many groups of kids that received certificates of achievement today following the conclusion of the camp.

Ocean City's Junior Firefighter Camp will return next summer. Kids aged 9-12 are eligible and do not have to live on the island. Anyone interested should be on the lookout for signups in spring 2022.

Every beach could use a "Schmoopy"! That's what kids call 18-year-old Ryan Orlov, who created a unique summer camp by the Jersey shore!