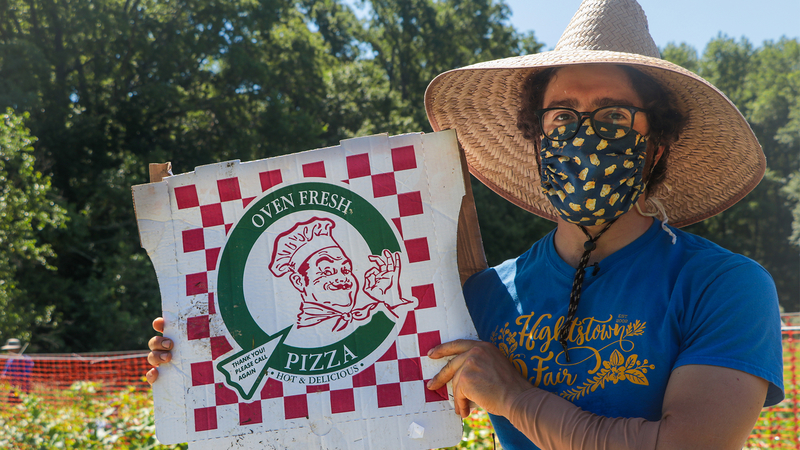 BORDENTOWN, N.J. -- "I think teaching people that they can simply eat pizza and do something good for the earth...that's the key," said Sruti Desai.

Just outside of Trenton, which is considered the "birthplace of tomato pie," Bordentown City also has a robust pizza scene that launched this program into orbit. They have since collected thousands of pizza boxes.

Inspired by a similar initiative in North Carolina, Fernbrook Farms partnered with the Bordentown City recycling coordinator, Environmental Commission, and Green Team to create the Pizza Box Drop Off.

The small shed-like structure stands beneath a tree at 209 Crosswicks Street in Bordentown, New Jersey. Anyone with a leftover pizza box is urged to empty the excess waste contained inside before sliding their box through the slot.

Every week, Abe's Acres Farm, Fernbrook Farms, or Rancocas Creek Farm will pick up the boxes.

"We use them for weed suppression and for building new beds out in the field," said Gabriel Siciliano, owner of Abe's Acres Farm.

"When something is biodegradable, insects, bacteria, fungi need to work in concert to break it down," Siciliano said. "That doesn't happen in landfills. But it does happen out here."

Siciliano says it is a long-term solution to keeping land fertile and rife with essential life forms such as pollinating bees, earthworms, and fireflies.

The Bordentown City Green Team hopes to expand the concept into more areas of New Jersey, potentially through state grants.

"To see how many farmers are actually producing locally, I think it's a huge deal. To be able to be the mecca of that is really important," said Sruti Desai.

These pet treats help the community and the earth by recycling from local farms and other businesses. Community Journalist Matteo reports.