Neighbors across multiple counties in New Jersey continue to clean up after Ida wreaked havoc on their communities.
WPVI
By Trish Hartman 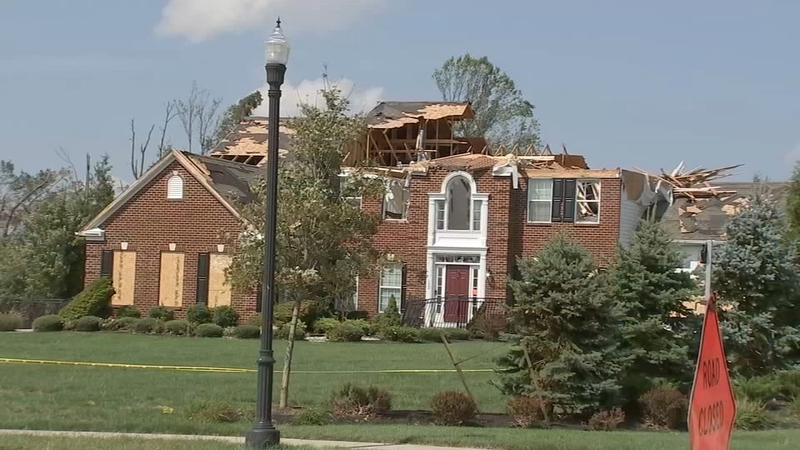 WENONAH, New Jersey (WPVI) -- Two weeks after the remnants of Hurricane Ida swept through South Jersey, progress is being made. Trees have been cleared from roadways, but many homes are still being assessed for damage.

"Two weeks ago we would've been standing in the shade. Now, there is no shade. There used to be a forest in back of us, there is no forest," said Dean Polk of Wenonah.

His deck and sunroom on the rear of his home were destroyed by the tornado, as was the wooded area just behind his home.

Many people in Gloucester County are getting used to a new landscape.

Homes in places like Mullica Hill and Wenonah still have gaping holes left from the EF-3 tornado that came through two weeks ago.

On Marion Avenue in Wenonah, crews are still clearing trees and branches from properties.

Residents on Salvatore Drive in Mullica Hill, New Jersey are still cleaning up more than one week after an EF-3 tornado devastated their neighborhood.

"We couldn't see the street. I could hardly see the next-door neighbors. My son tried to come over from the next block over he couldn't get through either," said Rose Contarino, remembering the mess of trees that covered their property and the road after the tornado.

She and her husband John say a lot of work has been done to clear the roads over the past two weeks.

Now, it's a matter of coordinating with insurance companies and contractors to fix their fence and roof.

"We're just waiting. You know. Oh, and the air conditioner got smashed, too," said Contarino.

Residents impacted by the tornado or flooding during Ida can come to the library to find temporary housing or apply for federal disaster assistance.

Neighbors in Lambertville, New Jersey are working together to survey the damage from Hurricane Ida, after water rose several feet Wednesday night, flooding homes and cars.

Similar centers are set up in Hunterdon and Gloucester counties.

In Lambertville, where officials say more than 50% of homes suffered moderate to severe flood damage, a multi-agency resource center was available on Wednesday to help victims.

"I've heard it over and over again from our residents, 'Our basement has never flooded and we got 6 to 9 feet of water in our basement.' All the way up to folks on the north end of town who haven't flooded since 1955 who have severe damage to their homes now," said Lambertville Mayor Julia Fahl.

Fahl says full recovery from the flooding there could take 18 months to two years.