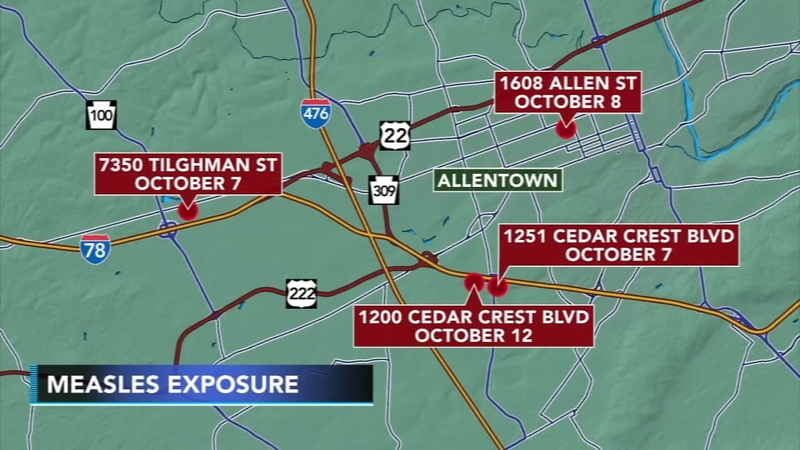 ALLENTOWN, Pennsylvania (WPVI) -- Monday evening Joanne Butler walked into a medical building on South Cedar Crest Boulevard. She didn't expect to be there.

But that's where she was being tested to see if she has the vaccine for measles.

"They said we need you to call this phone number and gave me a number and said it was an infectious disease," she said.

Butler is one of many people who was likely exposed to the viral disease around the Allentown area.

The State Department of Health confirms a patient at Lehigh Valley Hospital has measles.

Butler was in the hospital ER for her daughter at the same time the infected patient was.

"They said this was open till 9 tonight to make sure anyone who might need to have a test done can get one," she said.

It's confirmed the sick patient was at four locations on these dates:


The health department is urging anyone who believes they were at one of the locations on the dates above to contact the Lehigh Valley Health Network.

"Once that series, that chain reaction starts, it just goes on and on," he said.

He says in the beginning symptoms are like that if the flu, but then progress with a rash which can spread to your face, palms, arms and chest.

In some rare cases the effects could be long-lasting, he said.

"A relatively small number but important number of people with measles go on to get brain damage, heart damage or even seizures. It's not common. But tragic because this is preventable," Rhodes said.

Rhodes also said if you've got the vaccine, you're fine.