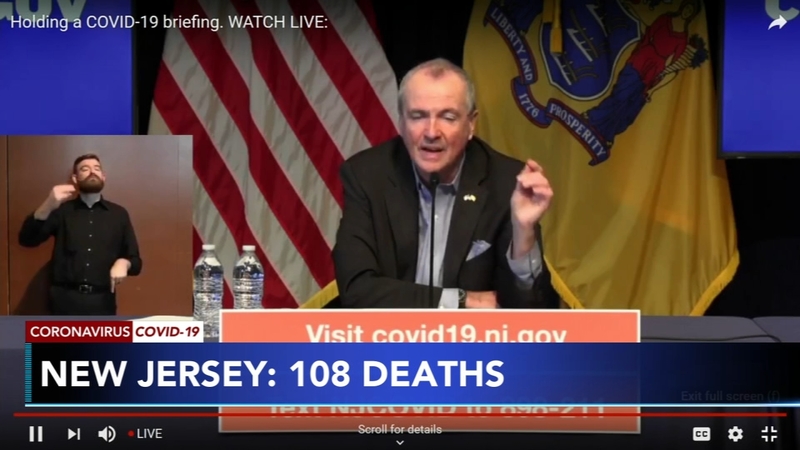 The governor also said the state is dispersing $140 million to health care providers to help fight the virus.

For most people, the coronavirus causes mild or moderate symptoms, such as fever and cough that clear up in two to three weeks. For some, especially older adults and people with existing health problems, it can cause more severe illness, including pneumonia, or death.

A look at Friday's developments:

Murphy called the state's climbing death toll tragic, though he said that it's not surprising and that health officials expect it will continue to rise for now, until the mandated distancing orders begin to take effect.

New Jersey officials give COVID-19 updates for increase cases and the states efforts to reducing the spread.

The Gloucester County Department of Health confirmed Thursday night that a resident ill with COVID-19 has died, the first fatality in the county.

The patient was an 82-year-old female who was hospitalized with underlying medical conditions.

Freeholder Director Robert M. Damminger reported, "We are saddened to report the first Covid-19 related death in Gloucester County, New Jersey, and we extend are deepest sympathy to her family and friends."

As of Friday morning, Gloucester County has 42 positive cases of COVID-19.

The Democratic governor said the state is dispersing $140 million in state aid to hospitals and other facilities.

He also said most residents getting assistance formerly called food stamps will be getting more aid because of the COVID-19 outbreak.

Roughly 60% of the 340,000 households who get help from the Supplemental Nutrition Assistance Program will see an extra benefit payment on Sunday, according to the governor's office. Families that already get the federal maximum amount won't be eligible for the higher benefit, but Murphy's administration says about 205,000 households will qualify for it.

The money comes as part of federal legislation that set aside $70 million for New Jersey families.

Police told NJ.com that while officers responded to a car accident, they spotted two vans full of people and a tent set up in a backyard apparently in anticipation of a wedding celebration.

The Ocean County prosecutor's office said in a statement that the gathering was dispersed and a future court date is pending.

Drive-thru testing centers for state residents in Bergen and Monmouth counties will be open Saturday only for workers in health care, law enforcement, Murphy said.

A new field hospital at the Meadowlands Exposition Center, which Murphy had announced earlier, is expected to open next week, the governor said. It will be a general hospital.

Another field hospital is set to open in Edison, though a date has not been given. That facility will be for COVID-19 patients.

On Friday, Jersey City opened two testing centers, one drive-thru and the other walk-up.

Jersey City Mayor Steven Fulop is set to open the centers on Friday for city residents only.