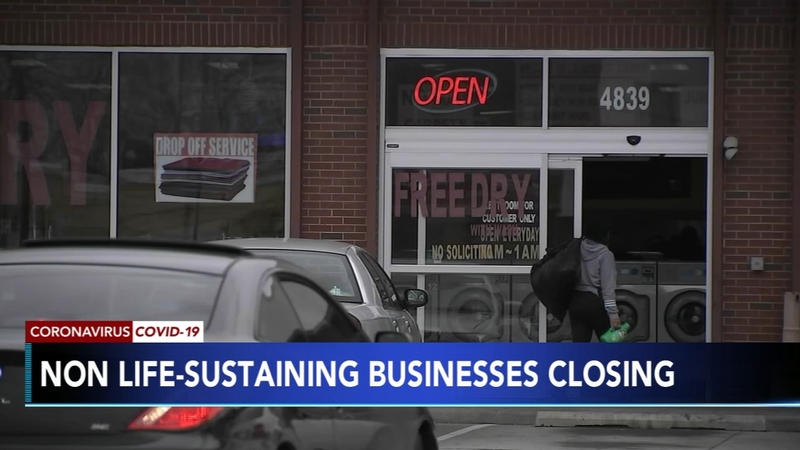 "Per Governor Wolf's and Dr. Levine's orders, businesses that were non-life sustaining were ordered to close their physical locations on March 19, at 8 p.m. This order stands, only the enforcement timing will change and become effective on Monday, March 23, at 8 a.m.

Citing his authority under the state's disaster declaration law, Wolf, a Democrat, ordered more than 150 types of businesses to close their physical locations, warning that enforcement against violators would begin Monday.
The full list of the businesses the state deems "life-sustaining" is below. You can also view the entire list here.

Those businesses requesting clarification on whether they are defined as life-sustaining should check the list, email the Department of Community and Economic Development customer service resource account at ra-dcedcs@pa.gov, or call 1-877-PA-HEALTH and select option 1 to reach DCED staff, according to a news release.

It was among the toughest measures yet taken by a U.S. governor in response to the virus pandemic. It also drew fierce condemnation from majority Republicans in the Legislature.

"I had hoped for voluntary compliance so our public safety officials could focus on assisting with the crisis," Wolf said in a video statement. "Unfortunately we have not seen full compliance. We have no time to lose."

Wolf said his order would be enforced by state troopers, local officials, the state Health and Agriculture departments and the Liquor Control Board. The two-term governor had previously said he would not use police for enforcement.

Businesses that fail to comply risk citations, fines or license suspensions, and "forfeit their ability to receive any applicable disaster relief and/or may be subject to other appropriate administrative action," Wolf's office said in a statement.

Criminal prosecution is also a possibility, with violators subject to fines or imprisonment, Wolf's office said.

Law enforcement will use discretion as they enforce the governor's order, Wolf spokeswoman Lyndsay Kensinger said in a separate email, citing a "range of potential actions," including notifying people about the closure order, warnings, citations and what she termed "mandatory closure."

Republican lawmakers warned of economic devastation and accused Wolf of setting off panic. Senate GOP leaders late Thursday pushed Wolf for more transparency and the opportunity for business owners to appeal, while their House counterparts suggested they might challenge Wolf in the courts.

Among those allowed to stay open are gas stations, grocery stores, beer distributors, drugstores and building materials stores. Restaurants and bars can continue to offer carry-out, delivery and drive-thru food and drink service, but not dine-in service.

Businesses under shutdown orders range from coal mines to building contractors to many types of manufacturers, plus professional offices including law firms and accounting offices.

Gene Barr, president and chief executive of the Pennsylvania Chamber of Business and Industry, predicted Wolf's order - unprecedented in its scope - would cause alarm in the business community, but he acknowledged "this is a place where there's no easy answers."

"He is faced with a tough decision, doing something that we all know is going to have significant economic damage, balanced against the need to save lives," Barr said.

The chamber will review the state's list of businesses deemed nonessential and potentially work to get some reopened, Barr said, but will not challenge Wolf's overall authority to mandate the closures.

The National Federation of Independent Business, a small-business advocacy group with 13,000 members in Pennsylvania, demanded to know the medical basis of the shutdown order, predicting it would cause personal and financial devastation. The group also said Wolf should have given companies more lead time to secure equipment and notify workers.

"We understand that there are necessary precautions that must be taken to protect life, but no other governor, even in states with many more cases and wider community spread, has taken this extreme action," said Gordon Denlinger, NFIB state director in Pennsylvania.

John Longstreet, president and CEO of the Pennsylvania Restaurant and Lodging Association, said the order was initially very ambiguous, causing panic over whether hotels would have to shutdown and put guests out within hours. But the industry received assurances from the Wolf administration that lodging facilities are exempt.
"It would have meant thousands of guests put out on the street, without anywhere go to," Longstreet said. "We've got this resolved now."

Meanwhile, with schools ordered shut for at least the rest of March and possibly longer, the state Education Department canceled statewide tests for schoolchildren because of the coronavirus pandemic.

Health Secretary Rachel Levine said her agency is asking hospitals, starting Friday, to update their emergency plans to accommodate patents who contracted COVID-19, the disease caused by the new coronavirus.

The department is lifting a regulation that prevents a hospital from adding beds without permission, and is trying to make sure that hospitals have adequate supplies of personal protective equipment and ventilators.

The Health Department reported a sharp rise in the number of confirmed cases on Friday, adding 83 in the past day for a total of more than 260 in 26 counties. There has been one death from COVID-19 in the state.

Health Secretary Rachel Levine said cases will continue to surge. The Wolf administration is working to determine hospitals' capability to handle it and exploring options to add bed space, staffing and supplies, she said.

One possibility is creating beds in hotels for patients with less serious ailments, while Wolf's administration told hospitals to postpone elective procedures.

Still, western Pennsylvania's biggest hospital system, UPMC, on Friday said that it would not put off elective surgeries. Dr. John Williams, chief of the division of pediatric infectious diseases at Children's Hospital of Pittsburgh, said he did not see "widespread community transmission yet."

For most people, the new coronavirus causes only mild or moderate symptoms, such as fever and cough. For some, especially older adults and people with existing health problems, it can cause more severe illness, including pneumonia. The vast majority of people recover.

A review of weekly data going back to 1987 shows a high point of 61,000 in early 2010, when the effects of the Great Recession were taking hold.

The department fielded more than 170,000 claims filed Monday through Wednesday, including 70,000 on Tuesday alone.

The agency is not releasing figures for Thursday and Friday, saying the federal government has embargoed this week's figures until next Thursday.

A Harrisburg-area law firm is challenging the governor's power to shutter law offices throughout Pennsylvania.

By ordering law firms to close, Wolf deprived citizens of their right to counsel, lawyer William Costopoulos argued in court papers. Costopoulos' petition noted that the high court, in ordering the closure of state courts this week, created exceptions for emergency petitions involving custody, protection from abuse and other matters.

In an interview, Costopoulos said the executive branch doesn't have a right to meddle in the judicial branch.

"The governor, though his intentions are well meaning in light of this pandemic, does not have the authority to usurp either the Supreme Court or the Constitution when it comes to the practice of law," Costopoulos said.

In the second suit, a law firm, a gun shop and a would-be gun buyer asked the state Supreme Court to stop Wolf from shuttering businesses determined to be not "life-sustaining," arguing he lacks that authority under state law.

The suit said the state's gun shops "have been left with insufficient guidance as to their potential status as 'life sustaining.'"

It also challenges Wolf's order on Second Amendment and other constitutional grounds, saying the right to bear arms "is the epitome of life-sustaining."

Wolf's order Thursday night said more than 150 types of businesses had to close their physical locations. By Friday, that shrank to about 140.

Friday's guidance also gave more detail about enforcement. Closures are enforceable through criminal penalties, including under health, safety and liquor laws, Wolf's administration said. Discipline would be progressive, beginning with a warning, and focused on businesses where people congregate.

Among those allowed to stay open are gas stations, grocery stores, beer distributors, drugstores, funeral homes and building materials stores. It also clarified that emergency building, highway, utility and bridge repairs are still permitted. Restaurants and bars can continue to offer carry-out, delivery and drive-thru food and drink service, but not dine-in service.

Businesses under shutdown orders range from vending machine operators to building contractors to many types of manufacturers, along with professional offices, such architects and engineers.