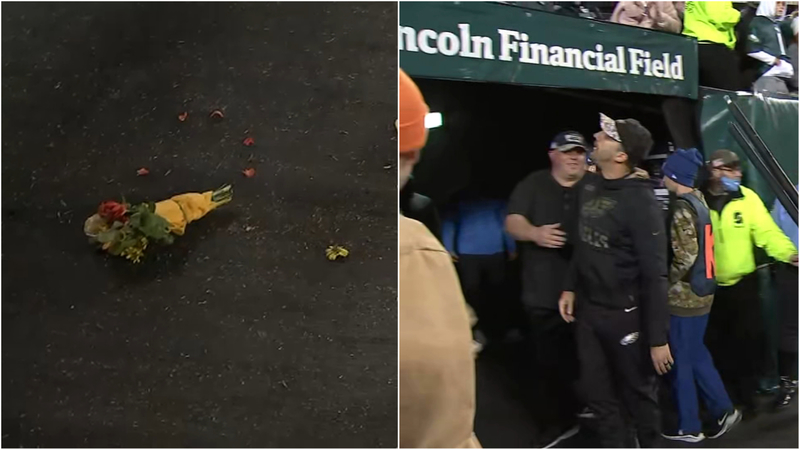 The Action Cam was there as the flowers were thrown just as Sirianni made his way into the tunnel.

Sirianni wasn't hit, but he did seem visibly upset after the incident.

Last month, the head coach used a flower analogy in a team meeting to hammer home the point that the Eagles are close to blooming on the field.

This isn't the first time Philadelphia sports fans have pulled an angry stunt like this. Many will recall the time Santa was booed and pelted with snowballs in 1968.

As Nick Sirianni left the field, a fan threw a bouquet of flowers at him! Sirianni was understandably NOT happy #Eagles @6abc pic.twitter.com/9X40lA4eRJ

Facing the NFL's worst run defense, the Eagles tried to take advantage of the Chargers on Sunday. Philadelphia had 176 yards rushing, including 62 from QB Jalen Hurts. But it wasn't enough.

The Eagles (3-6) still haven't won a home game in four tries under Sirianni.

When asked about Chargers quarterback Justin Herbert's 84% completion percentage, the head coach said he's getting the team back on track starts with him.

"You have to be on your A game and have to be -- starts with us as coaches. So, I'm not going to say (Defensive Coordinator Jonathan Gannon) anything because that's -- my name is on that, right?" Sirianni said. "So, whatever happens on that field my name is on, offensively, defensively. I'm not the offensive coordinator, I'm the head coach.

"So, again, it's all of us together. So, it's first myself, getting the right calls and putting the players in position, then Jonathan, then the players executing.

"So of course, again, when a guy comes away and he's 84% you're going to say, 'We didn't do our job,' right? We just got to be better. Again, I have to go look at the tape and all the calls. Obviously not good enough starting with myself and by the defense there with the pass defense."

The Eagles will hit the road next weekend to take on the (5-4) Denver Broncos.