The pursuit started around 8:30 p.m. near Tyson and Torresdale avenues in Philadelphia's Tacony neighborhood.
WPVI
By Maggie Kent 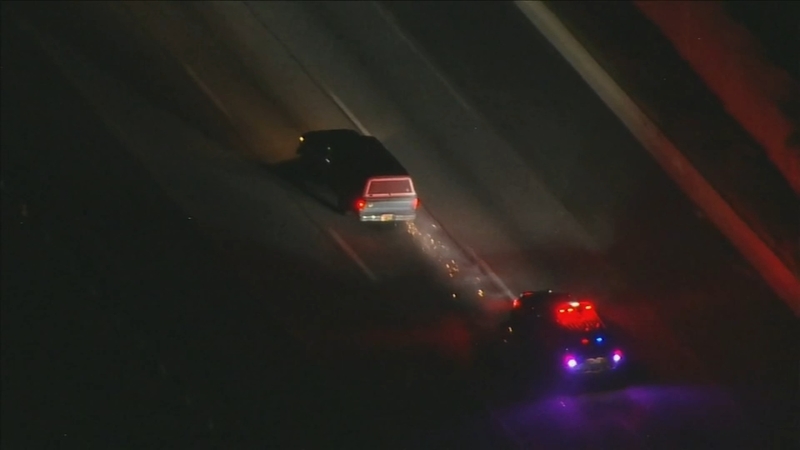 Police still searching for suspect who led officers on chase

PHILADELPHIA (WPVI) -- Authorities are searching for a suspect who led police officers on a chase from Philadelphia into Delaware County Monday night.

The pursuit started around 8:30 p.m. near Tyson and Torresdale avenues in the city's Tacony neighborhood.

Philadelphia police said it was a minor traffic infraction that led to a low-speed pursuit. The male driver was traveling the wrong way down Torresdale Avenue and drove off during an initial traffic stop.

The suspect led officers onto I-95 and eventually out of the city.

Chopper 6 was overhead as the suspect's vehicle began sparking on the highway during the daring escape.

Around 9:30 p.m. the door of the vehicle opened up near the St. Davids exit of the Blue Route. Someone then exited from the driver's seat and ran into the woods near the train overpass on I-476 between Archbishop Caroll and Villanova University's tennis complex.

You can see the back of the vehicle sparking on the highway as police vehicles pursued it about a half-mile from the Saint Davids exit.

After the suspect ditched the vehicle, officers continued the pursuit on foot with flashlights and canines near the Villanova train stop.

"We could hear all the helicopters and see all the lights. We could hear the people shouting, trying to hunt down on the train tracks," said Brette Husar of Villanova.

Although the suspect remains at large, Radnor Township police said there is no threat to public safety.