The officer who was hit told officials he heard pops, then felt a stinging in his chest.
WPVI
By 6abc Digital Staff 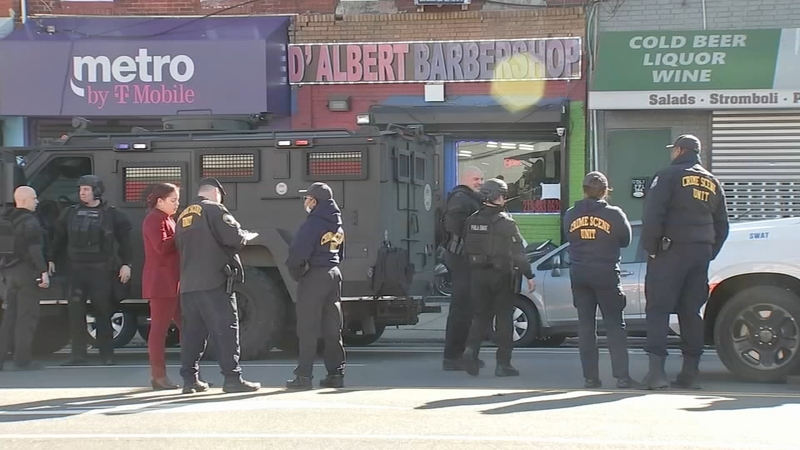 PHILADELPHIA (WPVI) -- Philadelphia police have identified the suspect who allegedly opened fire on SWAT officers Friday afternoon, hitting one in his bulletproof vest.

That suspect, Kristian Reyes, was being sought for a parole violation, police said.

Reyes was charged with attempted murder, aggravated assault on a law enforcement officer and related offenses. He was also charged with several drug manufacturing offenses.

Police say the SWAT officers announced they had a warrant before entering a building in the 100 block of W. Lehigh Avenue just after 12:30 p.m.

As they were attempting to force their way inside an apartment on the third floor, the officer who was hit told officials he heard pops, then felt a stinging in his chest. He looked to see drywall dust on his shoulder and holes in the wall and apartment door.

That's when he realized he had been hit by a bullet and left the building. The bullet did not penetrate his vest, police say, and he was left with only a red mark on his chest.

After the gunfire, police say Reyes jumped down from his third-floor window to the building's second-floor rooftop, where a police backup team was waiting.

Police say the officers ordered Reyes to drop his gun, but he then pointed the weapon at them. One of the officers fired at Reyes, officials said, but missed.

#BREAKING: An officer has been taken to Temple Hospital.

According to @6abc sources, police were serving a search warrant. The suspect was known to have drugs & guns inside.

The suspect fired at police, thankfully the officer is OK. Suspect was not hit either. pic.twitter.com/x6VKYYjx2H

Reyes tossed his gun on an adjacent rooftop, police say.

An officer who made his way onto the 2nd floor climbed through the window onto the roof. Police say there was a brief struggle after Reyes refused to obey the officer's command to show his hands, but Reyes was eventually handcuffed.

Reyes was taken to the hospital to be checked out after complaining of ankle pain.

"It's disrespectful, it's embolden... it's a slap in the face."- @PPDCommish during update on gunmen who shot and injured a member of a SWAT team, while serving a warrant. @6abc