Indoor dining to resume on Jan. 16 in Philadelphia, but with restrictions 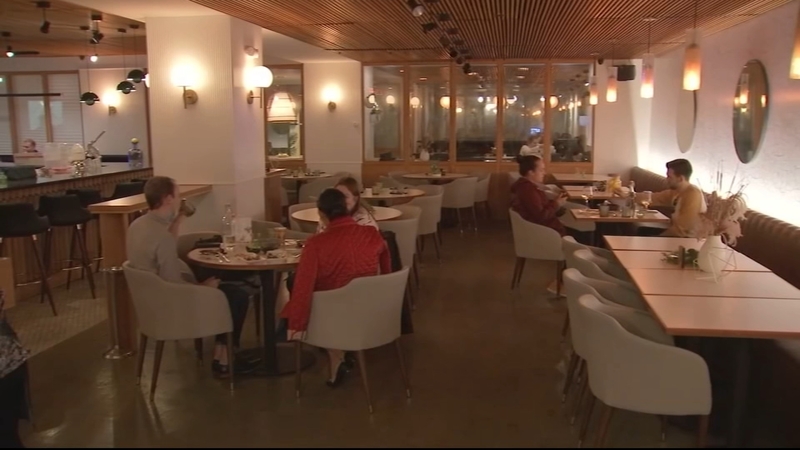 Indoor dining to resume on Jan. 16 in Philadelphia, but with restrictions

However, there will be some restrictions.

"We will allow restaurants to provide indoor dining after that date with seating of 25% of their approved occupancy," Philadelphia Health Commissioner Dr. Thomas Farley said.

Farley said tables will be limited to a maximum of four people, and they must be from the same household.

"We don't want people mixing with other households...and passing infection that way," he said.

Masks must be worn at all times while inside the restaurant, except when a person is eating or drinking.

Masks must be worn at all times while inside the restaurant, except when a person is eating or drinking.

For restaurant owners, Saturday can't come soon enough. Indoor dining can reopen, but for some small shops, 25% seating capacity may mean just one or two tables.

"If you're a small restaurant that has 10 tabletops, or 12, it's simply not enough to survive," says Michelle Shannon, of Center City District.

Center City District has launched a campaign called "Save City Restaurants" to encourage people to take out and keep small businesses afloat.

"Not only is Philly a city of food, and ethnicities, and neighborhoods, it's just part of our DNA and we can't lose that," says Shannon.

On Saturday, theaters are allowed to reopen at 10% building capacity.

"Ten percent capacity does not do anything for theaters and live arts," says Brian Buttler, who manages media relations for the Wilma and Arden theaters.

With this easing of restrictions, the doors will still be closed. The Wilma theater has 300 seats, 30 people could barely cover the sparsest of live productions.

"By the time you look at a cast or crew, the employees to come in that are ushers, etc., it's beyond 30 people. So there's no room for anybody else," says Buttler.

When restrictions do ease, the Wilma plans on installing a viewing "globe" with stations to separate and protect audience members.

The Pennsylvania Restaurant & Lodging Association (PRLA) said, of the 500 full-service restaurants in Philadelphia, more than 200 are closed right now, with 50 of them permanently.

Indoor dining at Philadelphia restaurants has been banned since Nov. 20, as coronavirus cases were rising in the city and officials were anticipating holiday gatherings.

This was the second ban on indoor dining during the pandemic so far. From March 16 to Sept. 8, there was no indoor dining. City officials then allowed restaurants to open at 25% capacity, then increasing the limit to 50% on Oct. 2 before the latest ban went into effect.

Restaurants must go through a self-certification process to go to 50% capacity, otherwise, they are limited to 25%.

Philadelphia, along with the rest of the state, reopened less risky settings such as museums, gyms, and casinos on Jan. 4, as well.