Video showed people stomping on a Philadelphia police vehicle during one of the incidents.
WPVI
By Walter Perez 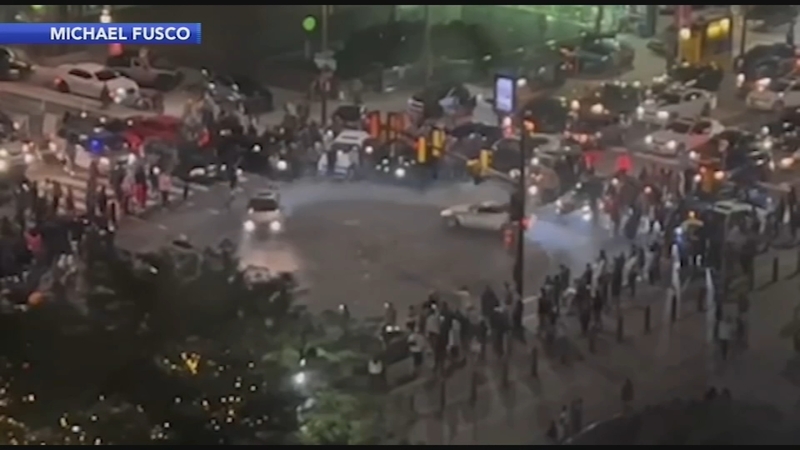 Street racing, unruly crowds 'will not be tolerated,' mayor says

PHILADELPHIA (WPVI) -- Street racing and drifting are dangerous, disruptive and illegal, and it's happening more and more on the streets of Philadelphia.

One of the recent incidents unfolded this weekend at the intersection of Adams Avenue and Tabor Road in Philadelphia's Crescentville neighborhood. That's where dozens of people used vehicles to block off the intersection while other cars were used to do donuts as fireworks popped in the sky.

CAUGHT ON VIDEO: Police are investigating after an unruly crowd gathered outside City Hall in Philadelphia Saturday night.

Dennis Santana, who lives nearby, says this is actually the second weekend in a row this happened.

"They can't do that," says Santana. "There has to be a little bit of respect, and I pray a lot that this situation don't happen again next week."

And that was not the only such incident in recent days. Another chaotic scene unfolded Saturday night right outside City Hall. It ended with a police vehicle being stomped on by members of the crowd.
Philadelphia First Assistant District Attorney Bob Listenbee says, "It needs to stop. That kind of behavior is just not acceptable right here in Center City, in front of City Hall. Just not acceptable."


On Sunday night, Mayor Jim Kenney released a statement concerning the danger that these stunts pose.

"What happened last night on streets near City Hall was incredibly and needlessly dangerous. Incidents that pose threats to safety and endanger the public will not be tolerated. We're working with the police department to ensure that these reckless incidents do not happen in the future," Kenney said.

Investigators say the large crowds gathering to watch these so-called drifters is an ongoing problem in the city. Police officials saying one recent gathering involved more than 200 cars.

Cell phone videos captured many of the recent gatherings. Authorities are hoping the public will help them with any information that might lead to an arrest.