WPVI
By Dann Cuellar
PHILADELPHIA (WPVI) -- Data collected by Action News shows shootings in the city of Philadelphia have surged since the end of May, and it shows no signs of slowing down.

On Monday night, Philadelphia police said two 15-year-olds were shot, one suffered at least 15 gunshot wounds. The teens, who are expected to survive, are just two of the dozens of shooting victims this year.

Data shows that 117 people have been shot in Philadelphia since June 1, or for the past three weeks.

Since the year began, nearly 800 people have been shot in the city, that's a 24% increase from the year before. 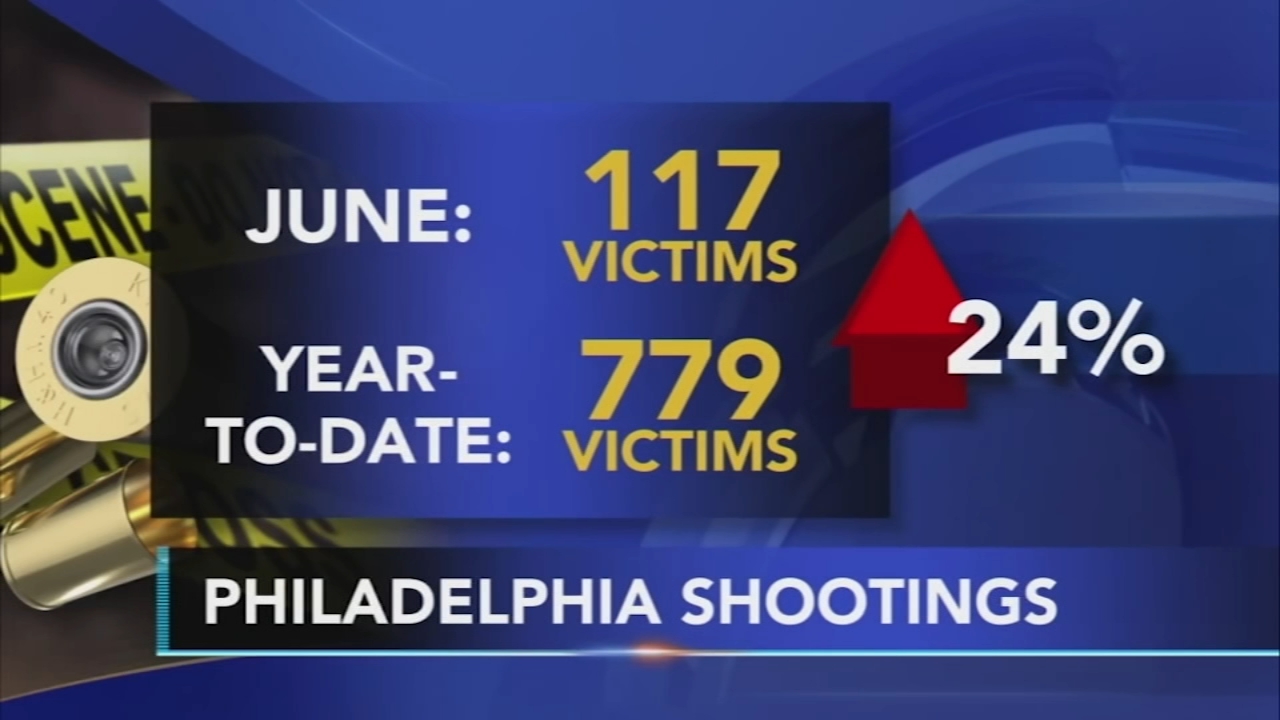 Data also shows homicide are also up 21% across the city.

And no one seems to be immune to the violence. Recently, Philadelphia Police Inspector Derrick Woods' Twitter feed was trending after he lost his own nephew to gun violence.

"Every year they're going higher and higher so we have to do something before we go back to how it was in the early 90s where we had 500 homicides a year," said Wood.

Stanley Crawford, with the Black Male Community Council, an anti-violence nonprofit in Philadelphia, noticed another disturbing trend in Philadelphia. He said many of the murders and shootings go unsolved.

"If I was in the murdering business, Philadelphia is a great town to be in because if I got 65% chance of getting away, this is a great spot to be in," said Crawford.

Crawford lost his own son, William, to gun violence in 2018. His son was one of 353 people killed that year.

It wasn't until recently that police revealed that William was one of four people killed by a contract killer they had just arrested. Crawford points out the disturbing rise in shootings comes at a time when the city is cutting millions from the police budget.

"The extreme of defunding the police is not rational, we need them like they need us," said Crawford.

"That's number one because there has to be a relationship between the police, the communities and the city administration," he added.

For his part, Wood wished the Black Lives Matter movement would take a stand in the rising gun violence.

"I think that in this movement, I would love to see the same energy we have for ending racism, police brutality and police reforms be put also into some of this gun violence," said Wood.

Action News reached out to the Philadelphia Police Department about the data, but there was no immediate response for comment.
Report a correction or typo
Related topics:
philadelphiacrimedata journalismcrime databasehomicideshootingphiladelphia police
Copyright © 2021 WPVI-TV. All Rights Reserved.
More Videos
From CNN Newsource affiliates
TOP STORIES