In the videos, officers refer to the encounter as a "traffic stop," but it's not clear from the video why the stop was initiated.
WPVI
By Trish Hartman 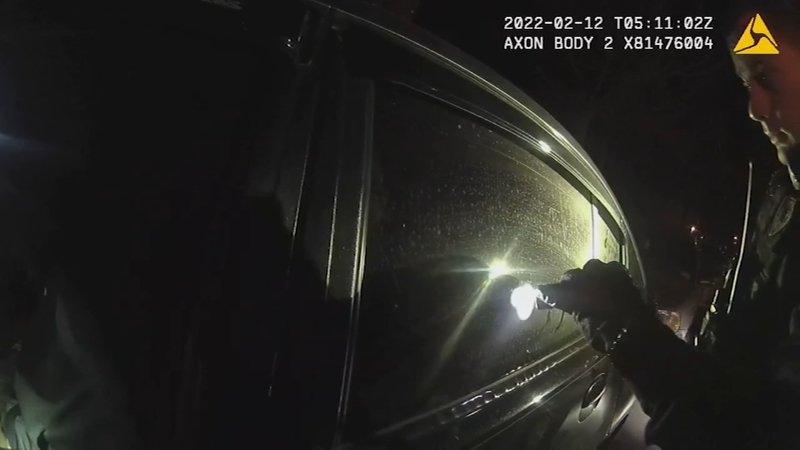 In the videos, officers refer to the encounter as a "traffic stop," but it's not clear from the video why the stop was initiated.

"Open the door. You gotta step out of the car," an officer can be heard saying when Henderson won't roll down his window and appears to be unable to produce his license, registration and insurance.

When Henderson does not get out of the car, the officer threatens to break the window.

"I'm calling the cops," Henderson is heard responding in the video.

"We are the cops!" an officer replies.

"I know, but y'all can't do this," Henderson says.

Several times the officers told him to stop reaching around the vehicle, using expletives.

Henderson tells them he's looking for his phone, to call his lawyer.

About five minutes after the video starts, an officer shatters the driver's side window.

Henderson screams and then starts the ignition. He accelerates forward and backward, crashing into vehicles.

"Holy!" one of the officers shouts, just before four shots are fired, striking Henderson.

The officer who broke the window and fired the shots has been identified as Michael Gettler by the Union County Prosecutors office, which is handling the investigation to avoid a conflict of interest.

The officers radio for help and remove Henderson from the car, starting CPR.

"Stay with us, stay with us," an officer can be heard saying as another performed chest compressions.

Henderson survived, but attorneys say he is paralyzed from the chest down.

He and his family are now suing the city of Trenton, the police department and the officers, who have been placed on administrative leave while the incident is investigated.

"He asked to call the police on the police. Because he knew that what they were doing was wrong before they shot him," said attorney Gregg Zeff.

He says through all this, his client was unarmed, and still doesn't know why police responded to begin with.

"We know he was in a parked car. We don't know why the police rolled up on him," said Zeff.

Zeff says Henderson now faces criminal charges because of this incident, including resisting arrest and obstruction of justice.

He says Henderson was originally charged with aggravated assault, but those charges were dropped.

In the lawsuit, Zeff says Henderson was targeted because of his race.

"Race is an overwhelming factor any time an African American man has an encounter with a police officer, period," said Zeff. "Assuming this was a traffic stop I think if Jajuan was a white man they would have put a ticket on the windshield and walked away."