The City of Philadelphia has seen 21 fire deaths so far this year.
WPVI
By Jillian Mele 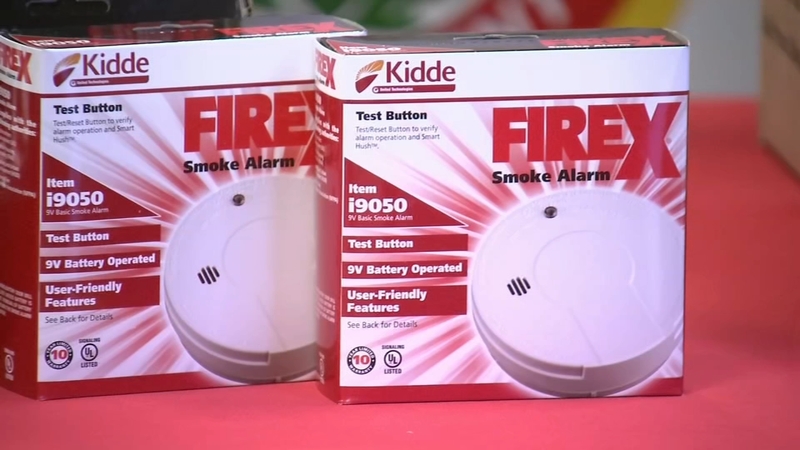 PHILADELPHIA (WPVI) -- More than 5 million homes in the United States don't have a single smoke alarm, according to Stephanie Berzinski, a spokesperson for Kidde.

Berzinski says house fires are burning faster and hotter than ever before.

"It's in part due to the materials that we are finding in furniture, synthetic material. It used to be 30 years ago you had about 17 minutes to escape a home fire. Now it's one to two minutes. That's with a working smoke alarm," she said.

That's why 6abc has teamed up with the Philadelphia Fire Department, Kidde, Toyota and the Home Depot for Operation Save a Life.

On Tuesday, 9,000 smoke detectors were handed out to more than 100 fire departments across the area to be distributed within those communities.

"This is amazing for Home Depot. Our core foundation is being able to give back to our community and this is one of the great ways we are able to do it. Ensuring that our community is safe," said Bob Roselli, a store manager for the Home Depot in Broomall.

Paul Muller, President of the Tri-State Toyota Dealer Association said "If we can prevent one death or one big accident, it makes it all worthwhile. It's not just the people in the homes. You think of the people that are involved when there is a fire: firemen, first responders, and the police."

Sadly though, we have seen devastating loss due to fire here in Philadelphia where there were no working smoke alarms.

The City of Philadelphia has seen 21 fire deaths so far this year.

Back in January, 12 people were killed, including 9 children, in the Fairmount section of the city when a Christmas tree caught fire.

Gustav Baumann, Battalion chief with the Philadelphia Fire Department said "for us, it's devastating. We live in the same communities. Our firefighters quite often live within a mile or so of the station they work at. It hits us equally as hard." And Fire Commissioner Adam Thiel adds "The worst thing for us is when we are not able to save a life. The time that you have is really limited. That makes early warning that much more important."

"We live in this community and are committed to making our community ether wherever we can and one way to do that is to recognize that fire is a real threat and that there is a way to fight it outside of the Fire Department and that's to have working smoke detectors in homes.," said 6abc General Manager Bernie Prazenica.