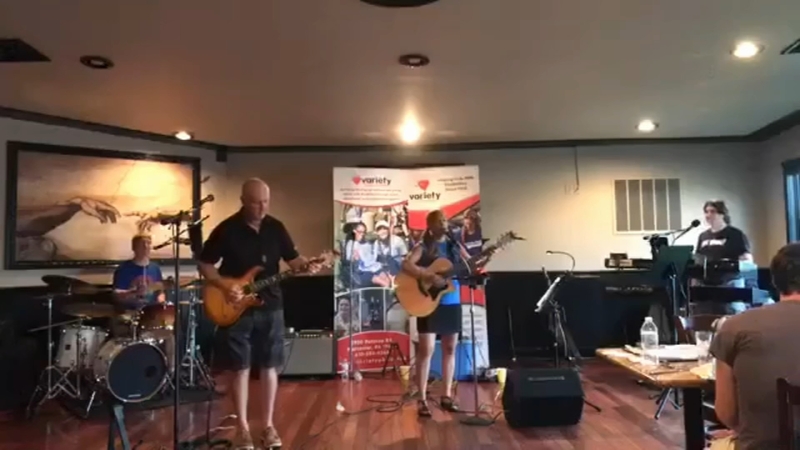 AUDUBON, Pennsylvania (WPVI) -- Maureen Stanko is a teacher at Woodland Elementary School living in Audubon, Pennsylvania. She's also a wife and a mother of two boys.

Her oldest son Nicholas, now 18, was diagnosed with autism when he was just 2 years old.

"He was born with typical development, and he ended up losing thousands of words," she said. "I think there was about a five-year period where you feel like... it's a tornado, and you don't really know what's going on."

Then about six years ago, she was able to put energy into a passion of hers: music. She started a band called 'You, Me, and Reenie.'

"It wasn't like a conscious decision. It was sort of more of an evolution," she said.

Her return to the spotlight started with small gigs, but then had the idea to hold a concert with ticket sales and donations going directly to The Variety Club Camp, a nonprofit organization dedicated to enriching the lives of children and young adults with disabilities.

She was shocked to raise over $3,000, so she kept it going, and it kept getting bigger.

"By the third year, then I had the fact that music teachers adding like strings, a string section, a horn section, there's a girl who plays flute," she said. "And then by the fourth year, it got so huge that it became a six-hour-long event. And there, there were 47 musicians who played just with me throughout this six-hour event."

Since the beginning of the concert series, they've raised over $20,000 for the Variety Club Camp.

"I mean, we are all just better people that they bring out the best in you, the special kids," she said. "You don't sign up for this world. But if you learn to embrace it, it turns into a very positive thing."