"I certainly recognize the significance of this moment," Dr. Jason Wingard said.
WPVI
By TaRhonda Thomas 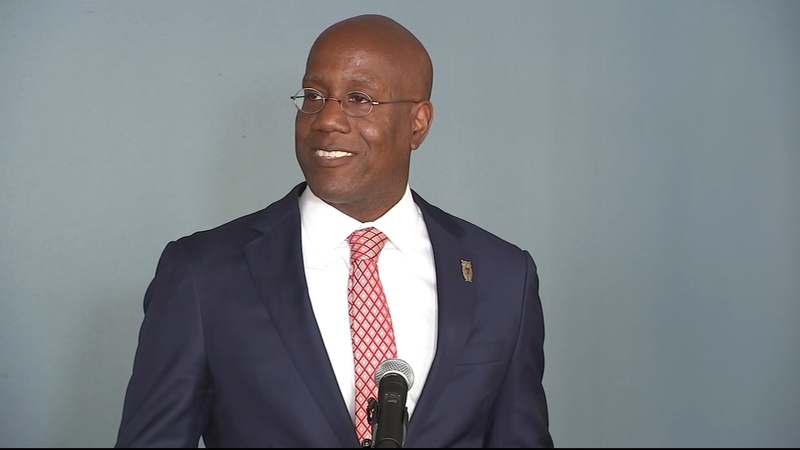 PHILADELPHIA (WPVI) -- Temple University has selected its next president.

In a historic decision, Temple said Tuesday that Dr. Jason Wingard, former dean and professor of the School of Professional Studies at Columbia University, will be the 12th president of the university.

“I’m proud to represent you.” — Dr. Jason Wingard, @TempleUniv’s newest president, addresses the media for the first time. He is the first African American president in the school’s history. @6abc pic.twitter.com/gWr29SPL9C

"I am honored by the board's selection and excited to lead one of the nation's premier urban research universities," Dr. Wingard said. "Temple will continue to provide its diverse and talented community of learners an unparalleled, accessible opportunity to leverage a best-in-class network of faculty and academic resources in support of dynamic and lifelong professional goals."

"Over 40 years ago, I began coming to this campus and this community with my father who was in graduate school at Temple University," added Wingard, recalling days and nights of walking the campus, talking to security guards, playing with neighborhood kids and listening to the wisdom of legendary Temple basketball coach John Chaney.

One of Wingard's goals is to help businesses see the value in Temple's more than 37,000 students. It's an issue in which he's well-versed. His new book "The Great Skills Gap: Optimizing the Talent Pipeline for the Future of Work," was released on the same day that he was announced as president.

"We're going to ask (the businesses), 'What is it that you want, employers?' We're going to make sure our curriculum reflects that," he said.

Wingard has held teaching and leadership positions at the University of Pennsylvania, Columbia, and his alma mater, Stanford. He also served as chief learning officer of Goldman Sachs and as founder and chairman of The Education Board, Inc.

"People say, 'A wonderful opportunity but why Temple?' Temple is an accessible, inclusive, equitable institution," he said.

But Wingard's new appointment isn't without its challenges. He takes the helm as community members raise concerns about Temple's growth, with some saying the university is taking over too much of the North Philadelphia neighborhood.

"If you're going to rebuild for the students, I think they should take care of the neighborhood just as well," said one long-time North Philadelphia resident who preferred not to give his name.

It's a concern that Wingard says he understands and is already devoting time to.

"We have to deepen our relationships with all of the key stakeholders and constituents that are involved in this community," he said, adding that he plans to listen to residents and create opportunities for engagement in future planning.

Following a unanimous vote of confirmation by the Temple Board of Trustees, Wingard will begin serving on July 1.

"Dr. Wingard is a dynamic and innovative leader who is extraordinarily qualified to lead our university in the 21st century," said Mitchell L. Morgan, chair of the Temple University Board of Trustees. "Like many of Temple's faculty, Dr. Wingard combines academic accomplishments with real-world experience. That's been a hallmark of Temple's education for generations."

Current president Dr. Richard M. Englert announced in July 2020 he will retire this year, after 45 years in 17 different positions at the university.

The president of Temple University is stepping down next year.

In September, Board of Trustees Chair Morgan announced the establishment of a Presidential Search Committee.

The committee sought and evaluated candidates for the president position.

"We heard faculty talk about the importance of research and shared governance, students advocate for social justice and a focus on diversity, and neighbors express their heartfelt desire for a president who is a strong presence in and advocate for North Philadelphia," Morgan said in February. "These sessions were extremely informative, and I am grateful for time and genuine interest of all who participated."

In addition, a survey was distributed to the university community.


The Committee said it received comments and suggestions from hundreds of participants in the meetings and more than a thousand survey responses.

Englert, a native of Detroit, Michigan, arrived at Temple in 1976 as an assistant to the dean of the College of Education.

"Temple is in a terrific place as an outstanding urban research university that focuses on student success and prizes diversity, accessibility, affordability and quality," Englert said in a statement last July. "(Temple founder) Russell Conwell's mission is alive and well, and it will be up to the next president to continue the work of determining how that mission will be applied to the challenges that lie ahead."

Englert agreed to remain as the university's 11th president during the search for a successor. He promised Tuesday there would be a smooth transition between the two presidents.

"My years at Temple have taught me that this university is constantly evolving, while remaining true to its mission. I have every reason to believe that Dr. Wingard will find the faculty, staff and students excited for the future and ready to move the university forward," said Englert. "I wish him well, and I look forward to working together to ensure a seamless transition."

Wingard and his wife, Gingi, live in Chestnut Hill with their five children ranging in age from 11 to 21.