A decade of street art showcased at South Philadelphia studio 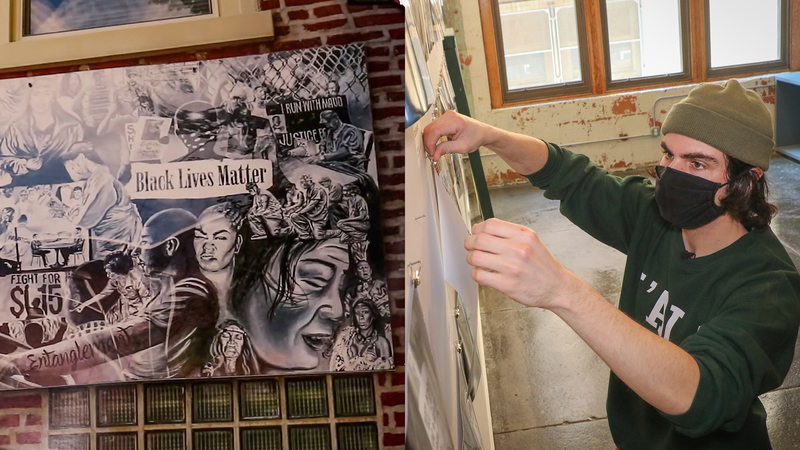 A decade of street art showcased at South Philadelphia studio

PHILADELPHIA, Pa. (WPVI) -- "Something I think I've realized over the last 10 years is just the power of art in the public space," said Conrad Benner.

Benner, a social media savant and founder of the popular blog, Streets Dept., fell in love with Philadelphia at a young age. Born and raised in Fishtown, the photographer began documenting street art in his hometown in January of 2011.

That particular exhibition, "10 Years Photo Show," is now open for the public to experience until April 25th. It is open Thursdays and Fridays from 10am to 5pm, Saturdays from 9am to 6pm, and Sundays from 9am to 2pm.

The location of Benner's exhibit is a former classroom in BOK, a multi-purpose workspace for small businesses, artists, chefs, and musicians alike.

"BOK used to be a vocational school transformed into, like, a creative space for people," said Symone Salib, who utilizes one of the many corridors to create her own artwork.

"I was working out of my house," said Salib. "To be able to come here, especially in the pandemic, I think, like, that's really important as an artist."

Salib is thankful for artists like Benner, who have created avenues for all styles of creators to succeed in the Philadelphia marketplace.

"Maybe in other cities, it can feel more competitive, rather than a community space where we can all win," she said. "I am where I am today because people like Conrad have opened the door to me."

Benner not only prioritizes promoting fellow artists but also encourages social activism through his photo-blog. Through his lens, he has tackled 24-hour subway access, youth homelessness, the war on drugs, and getting out the vote.

Most recently, Benner partnered with Mural Arts Philadelphia to create a series of posters titled, "First 100 Days." They are distributing free posters that depict illustrations about promises and policies they wish to see promulgated by the Biden/Harris administration.

"I think the power of art in public space is untapped," said Benner, "And I'm really excited to use the blog, this photo show, the work I do to sort of explore that."

RELATED: The future of female style starts in the 'Philadelphia Fashion Incubator'

Hidden inside Macy's in Center City, the Philadelphia Fashion Incubator helps creative women design the future for every style of clothing.