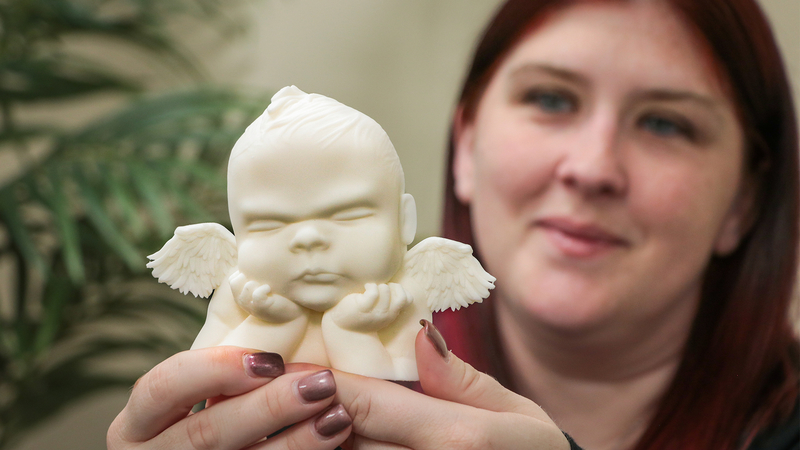 WESTVILLE, N.J. -- It was a lengthy process for Tina Rouh to conceive her second child. But after two in-vitro fertilization attempts, she became pregnant with Madelynn.

"She was so perfect," said Rouh. "She was a unique person that we wanted desperately and she was taken from us."

Unfortunately, the day she was taken home, Madelynn died in her sleep.

To this day, Rouh still has no better answer other than SUID, or Sudden Unexplained Infant Death.

The grieving family would come to only see their daughter in pictures. But at the same time, Rouh's ultrasound sonographer, Glenda Barachko, was designing something better than a photograph.

"I decided I wanted to make a sculpture either based on the 3D ultrasound picture or from a newborn photograph," said Barachko, who owns an elective 3D & 4D ultrasound business in Westville, New Jersey.

After she posted the idea on Facebook, Barachko quickly linked up with Rouh to sculpt her first precious memory.

"It just looks just like her," said Rouh. "The chunky cheeks and the very defined brow line and she had, like, a divot over her nose."

The porcelain print was designed by Kristi Centinaro, an artist who crafts detailed miniature faces before they are ready to be 3D-printed.

"It's not just photo accuracy. No machine could do this," said Centinaro. "It takes an artist's touch to really make it go that extra mile."

Their start-up, "Little Faces Limited," is currently taking orders for any family who wishes to create a keepsake in their newborn's honor. Glenda Barachko has every intention of bringing their product to a larger audience to benefit parents who lost their child.

"Once we start to generate a profit, I want to fund research to build awareness so that people that have to live through this can get proper support," she said.

She intends on contributing to the TEARS Foundation and Three Little Birds Pregnancy and Infant Loss Support in the future.

For now, she wants to remind her community that October is Pregnancy and Infant Loss Awareness month. According to the American College of Obstetricians and Gynecologists, early pregnancy loss occurs in roughly 10% of known pregnancies.

Barachko's story has gained a new context due to the recent news of Chrissy Teigen and John Legend's tragic pregnancy loss overnight. The celebrity couple has publicized their grief in an effort to comfort parents across the world who suffered the same loss.

"I always think of her as this wonderful vision of modern motherhood," said Barachko of Teigen. "I don't think she's ready to hear from us today, but I do wish that we could reach out to her and let her know that we would be more than happy to sculpt all of her babies," she said.

Barachko is also wrestling with the COVID-19 pandemic like all other businesses. However, it may have helped her.

While many obstetrics facilities are limited in capacity, Barachko's business allows up to 5 guests to accompany the mother during ultrasounds while wearing masks.

"When they're going in for their anatomy scan, what they really want is to bring their husband in, have him be able to see the baby too," she said. "But with that gone away because of COVID, it's been actually a good thing for my business because more people are coming to see us."