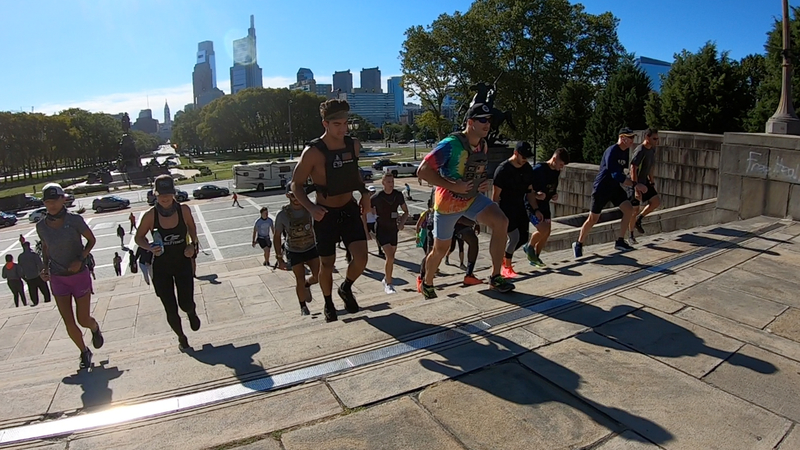 PHILADELPHIA, Pa. -- Around the clock, you can always expect to find someone climbing the famous "Rocky Steps" at the Philadelphia Museum of Art. This is especially true today, as local athletes are scaling the staircase for 24 hours straight.

Among the roughly 24 athletes taking part, more than $65,000 was raised to benefit cancer patients through Legacy of Hope.

"A lot of major events have been shut down," said the non-profit's founder and president, Michael Rowe. "But if we don't raise enough money, we're not going to be able to provide the support that we do every week."

Rowe embarked on this mission three years ago. Working in the Emergency Room at Thomas Jefferson University Hospital, he was heartbroken to learn that a young woman battling cancer could not afford insurance. He watched the patient's brothers mourn their inevitable loss as she lost her life.

That's when he decided to step up and do something about it.

The non-profit's Vice President, Gina Mancuso, hatched the brilliant idea to hold a 24-hour fundraiser at the Art Museum.

Having lost her friend to cancer, she felt it was her duty to make a difference in her name.

"It's the fight. We're climbing up the Rocky Steps. Just put one foot in front of the other," she said. "It's the power of what can we do when we all work together."

"Last year, I was out here and I was connected to chemo and I said, if I got on the other side of cancer, I'd show up and do this," he said.

Budny was just beginning treatment for Stage 4 appendiceal cancer. All he could do was sit in a lawn chair and cheer on his friends. Just one year later, he is running for the entire 24 hour challenge.

"It's great that I'm capable of doing 24 hours but it's more so that I'm able to raise the money for people with cancer," said Budny.

As he battled his way up and down the famous steps, another cancer survivor was taking up his own challenge.

Will Peoples was battling acute lymphoblastic leukemia at the same time as Budny. While receiving treatment, he was a beneficiary of Legacy of Hope's mission.

"I became a patient that they helped paying my rent bills and then also providing groceries," he said. "I mean without them, I honestly don't know where I would be."

Peoples decided to take his 24-hour challenge on wheels, riding his bicycle around the museum and on Kelly Drive alongside his friend, Lawrence Harrington.

"I'm very excited to be with you on this journey. We got this, bro," said Harrington.

To learn more about Legacy of Hope or to donate, visit their website.