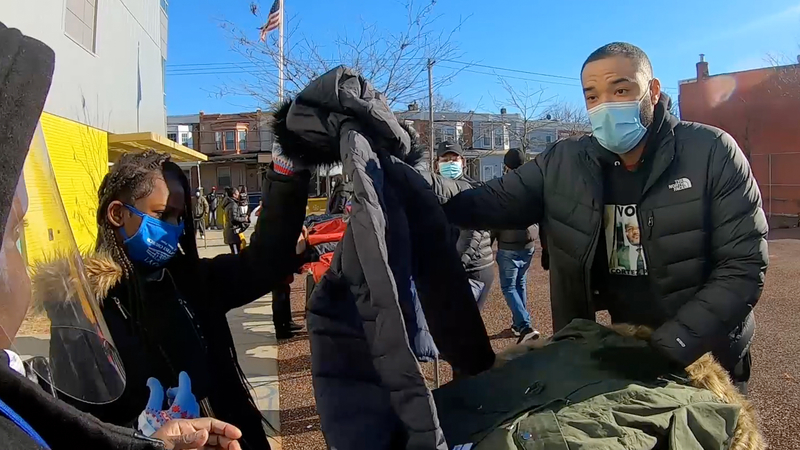 PHILADELPHIA, Pa. -- After hours of shedding blood, sweat and tears for charity, Leonard Chester and his longtime friends were left starstruck.

"This is the first time I've seen something like this in my neighborhood," Chester said. "Just to see so many families that helped raise me come get some supplies to help them through this winter."

In just two weeks, they organized a toy, coat, and food drive to benefit dozens of area families in need.

"If I can't serve, then I'm not doing my work in this neighborhood," said Chester. "Because so many people poured into me."

Leonard Chester was raised by his grandmother in West Philadelphia following his own mother's deportation from the United States. He says it's been more than two decades since he has seen her. But that wasn't his only challenge.

"I failed out of college my first time, but I didn't give up," he said.

Now a graduate of Temple University, Chester teaches sports marketing at Murrell Dobbins High School. Additionally, he founded a non-profit called, The Overcame Foundation, which teaches young people how to be leaders through creative platforms.

"They need people like ourselves to push them forward. Because, if it's not us, then we don't know who will," said Chester.

He redeemed the fruits of his labor after seeing dozens of young children grab a new coat and Christmas gift at today's event.

"Coats are expensive," said Athena Carson, who waited in line with three children. "Even though we don't go out, but when we do, they need something to cover themselves from the coldness."

Some of Chester's co-organizers, Kareem Thomas and Davone White, say they're eager to continue this event annually with the help of Daily Dove Care, Temple Unviersity, and many other local charities and businesses.

"We never had nobody to do this for us," said Thomas. "So, it feels good that we're doing this for our community."

RELATED: Philadelphia police officer gives back to neighborhood for Christmas

This Christmas, Philadelphia police toured throughout the neighborhood to surprise families with free gifts and food!