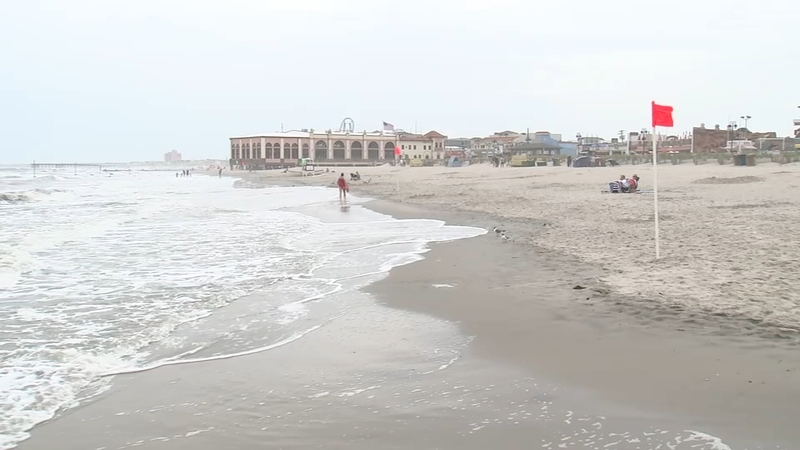 OCEAN CITY, New Jersey (WPVI) -- The steady rain from Elsa began moving into southern Delaware and Cape May, New Jersey late Thursday night. The storm will continue lifting northeastward through the night with the heaviest falling in the early hours of the morning.

Ocean City saw swells and rip currents again Thursday following a week of rough waters up and down the Jersey shore.

Well over 100 rescues were made by beach patrols in the region since Sunday. However, meteorologists say the swells earlier this week were not due to Tropical Storm Elsa.

Officials do not expect a major punch from Elsa, but they are still preparing for whatever the storm could bring Friday.

"Our goal is to keep bathers safe so the best thing to do in conditions like this is to keep them close with a close eye on them," said Lieutenant Andy Wise of the Ocean City Beach Patrol.

Mayor Jay Gillian said residents and guests might want to tie things down Thursday night due to winds from the storm.

"When you go to bed at night, and this storm hits, make sure you fasten things down. We have our municipal city lots from 9 p.m. until 12 p.m. Friday if you want to move your cars there," Gillian said.

"We walk the boardwalk and are making the best of it," she said.

In Margate at Blue Water Marina, boaters were also shoring up their ties in case things get rocky in the slip.

RELATED: Ahead of Elsa, crews in Delaware clear flood-prone areas

Karen Gould of Jenkintown said her boogie board cord was ripped off in the rough surf on Wednesday. On Thursday, she decided to stay in the sand.

"Yesterday the waves were really rough like they were taking me out. I was a little worried today so I didn't want to get too far out," said Gould.

During heavy rainfall, parts of Ocean City see flooding frequently. No storm surge is being forecasted for this storm, but flash flooding is possible.

John Moore is the owner and broker of Weichert Realtors Asbury Group. He said what it sounds like we might see from Elsa is nothing compared to some of the bigger storms that have hit the area.

"You really want to know your neighborhood and move your cars. That's the big thing. It floods from the ocean to the bay so the closer to the bay you are, the more chances of flooding," said Moore.

Brent Burke manages Island Beach Gear, which is close to the bay as you enter Ocean City on 9th Street. He said they put some extra sandbags on their outdoor merchandise display as they anticipate stronger winds.

"Any pellets, extra cardboard, loose trash or any loose planters, anything that can blow or float, we want to make sure is secured. With the wind picking up, we have extras out there today. We want to let people know what we sell. However, we want to do it in a safe way," said Burke.