Others went about their weekend exercise routine, not letting the snow get in their way.
WPVI
By Katie Katro and 6abc Digital Staff 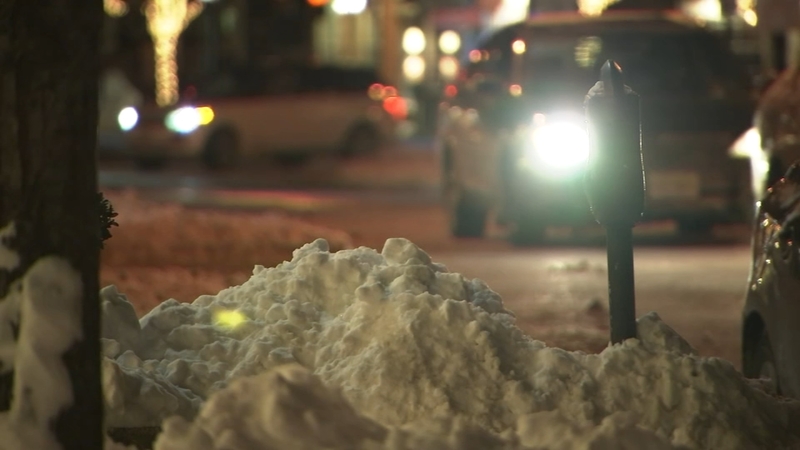 Residents prepare for cleanup after winter storm in Haddonfield, NJ

HADDONFIELD, New Jersey (WPVI) -- Saturday turned into a day of work mixed with fun for crews and residents across South Jersey.

As people walked down Kings Highway on Saturday night, they were watching for slick patches of ice.

RELATED: Watch: Time lapse videos of the snowfall at the Jersey shore and Philadelphia

"I would say since the street and the sidewalk is kind of dark already, it might slip out on you so we'll definitely be careful," Rachel Radulski of Fishtown said.

Ice formed a coating on cars that weren't cleaned off earlier in the day.

Driving was a concern for many at night, especially for those who don't have snow-friendly cars.

"Just taking the turns slow and being careful - looking out for other cars," Kieran Lynch of Collingswood, New Jersey said.

Even folks with larger vehicles said they made it a priority to get out earlier in the night before the temperatures dropped more.

"Just got this truck a couple of months ago and, for the first time, I needed to put it in four-wheel drive and it's been great," Christopher Cummings of Voorhees, New Jersey said as he got into his Toyota Tundra pickup truck.

Earlier in the day Saturday, Action News caught up with people revving their snowblowers and shoveling sidewalks.

"We got hit pretty good. The snow's pretty thick and as soon as you step on it, it gets all icy; it's not the easiest snow to shovel for sure," Jake Gale of Audobon, New Jersey said.

After the work, there was some time to hit the slopes for a fun reward.

"It's nice and packed in after a long day of people sledding so you slip right down," said Alice Lehman of Haddonfield, New Jersey who was with her family.

Even parents had a blast.

"It's the perfect hill because there are no trees in the way; it works out really well," said Benjamin Lehman of Haddonfield.

Others went about their weekend exercise routine, not letting the snow get in their way.

'The gym's not quite safe for me yet with omicron, so I got to get out here and do it," said Brandon Hamilton of Haddon Township.

NJDOT crews were scheduled to be out on the highways Saturday night, making a second pass to clear the shoulders, a spokesperson for NJDOT told Action News. Crews were set for salting, brining and more plowing for another 24 hours as temperatures remain low. NJDOT says crews don't want ice forming out on the roads.