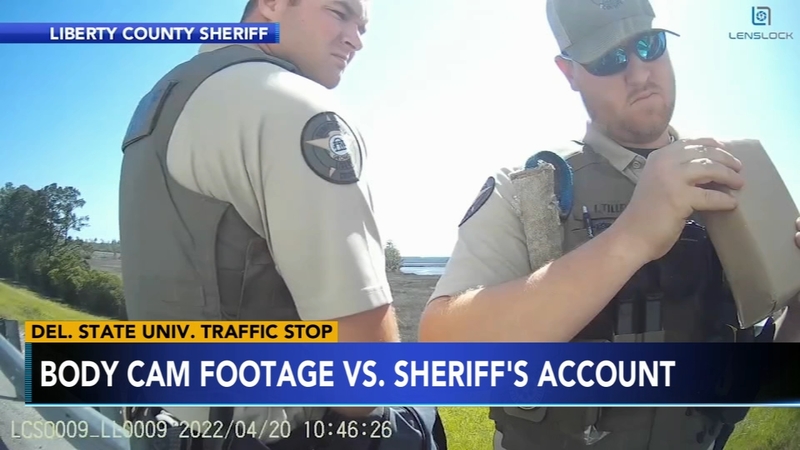 The bus was initially pulled over after authorities said the driver was incorrectly traveling in the left lane. He was later asked to step off the bus.

"Two to six officers, then they brought their K-9 and they started going through our stuff, sniffing our bags," recalled one Delaware State University women's lacrosse player.

"After that, they came on the bus and they told us they were going to be checking through our luggage," recalled sophomore lacrosse player Sydney Anderson. "They didn't ask us, they told us."

Head coach Pamella Jenkins said almost everyone on board was African American and called the incident racial profiling.

"I definitely felt it by the accusatory tone of the police officer. And while talking about narcotics, he went straight to marijuana," said Jenkins.

In response to these allegations, Sheriff William Bowman said he conducted an internal affairs investigation. He said his officers did everything by the book and also shared bodycam footage of the incident.

In the video, officers explain that while the bus was initially pulled over for a traffic stop, the officers had a right to bring out their K9s and conduct a clear air sniff, which alerted them to the luggage. Thus, prompting their search.

The officers did not find anything.

President Allen is requesting the incident be "be investigated by objective, external authorities."

"I spoke with Sheriff William Bowman of Liberty County on Tuesday and note his acknowledgment to me and at his press event of the historic concerns of African Americans in traffic stops with law enforcement. He even indicated an interest in reaching out to our lacrosse team for feedback to assist his department in improving its approach to people of color. I look forward to hearing from him exactly how he would like to proceed in that regard.

However, his public statement and the released body camera footage raise more questions than answers.

Sheriff Bowman insists that personal items were not searched; the video clearly shows officers searching toiletries and clothes, and even cutting open a family graduation gift. Sheriff Bowman said the officers were unaware of the nature of the passengers on the bus; the audio clearly demonstrates that the officers were aware both that this was a busload of 'schoolgirls,' and that they did not expect to find anything other than marijuana, which the officer who entered the bus said they were not looking for.

It has become abundantly more clear that this incident must be investigated by objective, external authorities. We continue to push forward toward that objective."