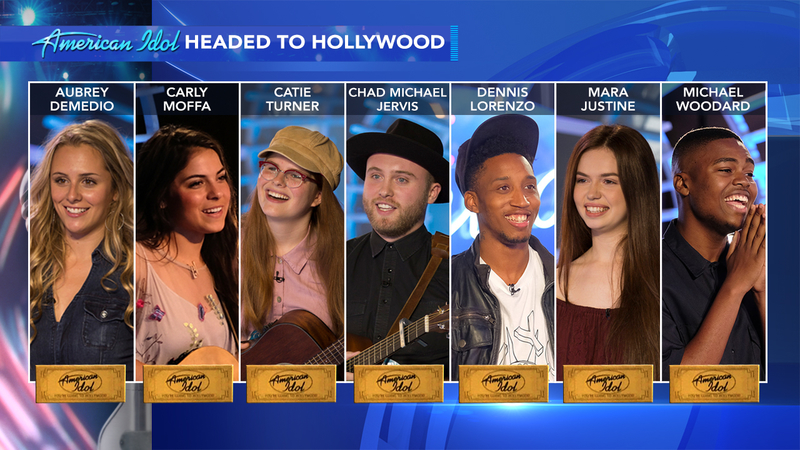 PHILADELPHIA (WPVI) -- We all know the Delaware Valley is full of talent and now several local talents are heading to Hollywood Week on American Idol as the competition heats up.

Catie Turner is an 18-year-old singer-songwriter from Langhorne, Bucks County. She's a high school senior at Neshaminy High School with a unique voice, a guitar and now - a chance at stardom.

Bucks Co. teen hoping to become the next American Idol - Alicia Vitarelli reports during Action News at 4pm on March 9, 2018.

Dennis Lorenzo is a 26-year-old father from West Philadelphia. He started playing guitar as a teenager and hasn't stopped since, moving both to Atlanta and then Los Angeles to chase his dream and making every sacrifice to make that dream come to life.

Mara Justine is a 16-year-old sophomore at Absegami High School in Galloway Township, New Jersey. Her mom, Linda, says she's had that big voice since she was a little girl and started singing when she was just 8-years-old.

Carly Moffa is a singer-songwriter from Williamstown, Gloucester County. This farm girl from Jersey took her musical drive a little farther down south for college in Nashville before packing her bags and touring the country playing her own music.

Aubrey DeMedio is an 18-year-old student from Schwenksville, Montgomery County. A college freshman at Millersville University, she says she's just a girl from a small town with big dreams and she's now one step closer.

Michael J. Woodard is a 20-year-old student from the East Falls section of Philadelphia who has been singing since he was 5-years-old. He's currently a sophomore at the Musician's Institute in Los Angeles and says he's seen his share of rejection in the business and it almost stopped him from going for a golden ticket.

American Idol airs on Sunday and Monday at 8 p.m. on 6abc.