More than 50 water rescues were made in the area as the remnants of Hurricane Ida produced heavy rain and tornadoes.
WPVI
By Trish Hartman 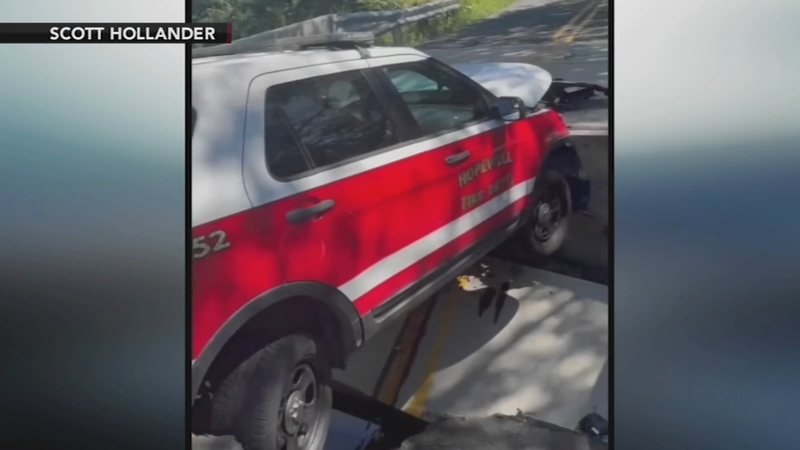 More than 50 water rescues were made in the area as the remnants of Hurricane Ida produced heavy rain and tornadoes across the Delaware Valley. Several of Wednesday's water rescues turned into very close calls for first responders.

A Hopewell Fire Department SUV became stuck in a washed-away Bayberry Road Bridge during the flooding.

"We just heard this really loud crash," said neighbor Aidan Young, who already had spent time in their family's basement during tornado warnings earlier in the evening. "We got our rain gear on and we could hear the car alarm was beeping and we said, 'Oh man, something's going on out there.' We went down the hill and there was an SUV that had just tipped into the culvert."

Police say the EMS chief was trapped in the vehicle with injuries that sent him to the hospital.

"We could tell that he was just in a lot of pain and really shook up and the fire department got here five to 10 minutes later and pulled him out," said Young.

That same night, a call came in for a vehicle water rescue in the area of 518 and Route 31.

Hoffman was able to escape from the vehicle through an open window but was swept away in the raging floodwaters.

He grabbed onto a tree limb.

RELATED: 25 deaths now reported in New Jersey due to Ida, including 2 in Mercer County

"So, when the call came in that Hoff was in distress and we have a motorist, it was all hands (on deck), we have to go out there and we have to rescue these folks," said Karmazin.

Two more officers quickly arrived, but Patrolmen Michael Makwinski and Robert Voorhees found themselves in the same position - hanging onto tree limbs in the dark.

When they saw water rescue teams from Hamilton Township and Lawrenceville, Hoffman fired his weapon into the air.

"That was a very good sign to us that he was still alive and he was still located out there within the wood line," Karmazin said.

All three officers were rescued alive. The initial victim that called for help did not survive, authorities said. That person's identity has not been released.

Karmazin says with more than 50 water rescues made that night and two fatalities, it shows the danger of flash flooding.

"It's very hard to back off in a scenario when someone you know and absolutely respect and love is in peril," said Karmazin. "Whether you're a citizen - regardless, that's what we do. We roll hard and it just came up that quick."

Karmazin says this situation will be examined so the department can learn from it, adding that he'd like to equip officers with some kind of strobe light so they can signal for help.

All three officers are expected back at work as soon as this weekend.