If an automatic recount is triggered, the recount would begin on or before June 1 with results by June 7.
WPVI
By Maggie Kent 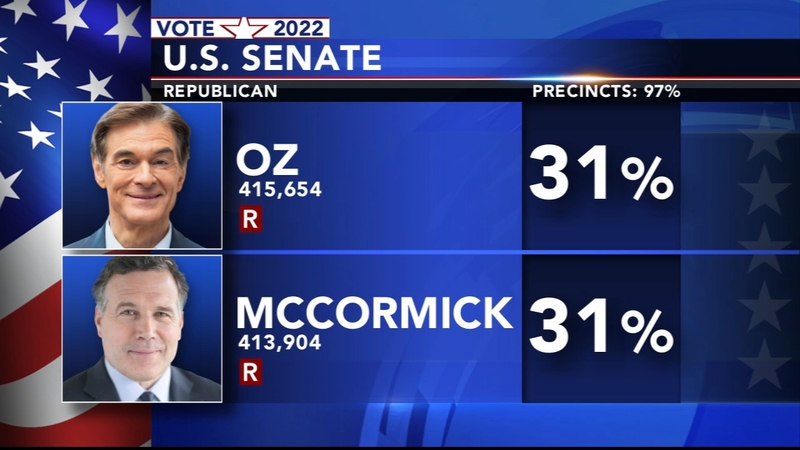 PHILADELPHIA (WPVI) -- The votes are still being counted from Tuesday's Pennsylvania primary election.

As of 5 p.m. Wednesday, about two-thirds of the ballots were counted in Philadelphia. Mail-in votes and ballot drop box votes continue to be tallied, with about 28,000 to go.

"Election night has turned into election week," said City Commissioner Lisa Deeley. "When you have to wait until Election Day to start touching tens of thousands of ballots, it's going to take a while."

Neither Mehmet Oz or Dave McCormick are out of the race for GOP Senate nominee just yet.

The margin of victory would have to exceed .5% of the vote to avoid an automatic recount.

"That would probably be between six and seven thousand (votes) that one candidate will need to beat the other by," said Al Schmidt with Committee of Seventy.

"This time around we've already had a million people request mail-in or absentee ballots," said Berwood Yost, director of the Center for Opinion Research at Franklin & Marshall College.

In Pennsylvania, mail-in counting can't start until Election Day, which means the days of close elections being called the night of are harder to come by as mail-in voting grows in the Keystone State.

"An election couldn't be closer than the Oz-McCormick race right now. Unless it's a blowout or a landslide, it takes days to know who won with so many voting by mail," said Schmidt.

Why was the race between McCormick and Oz so close? Some believe the former president's endorsement came a little too late.

"The Trump endorsement would have counted more in February before Oz and McCormick spent so much money going after each other," said Christopher Nicholas of Eagle Consulting Group.

If an automatic recount is triggered, the recount would begin on or before June 1 with results by June 7.