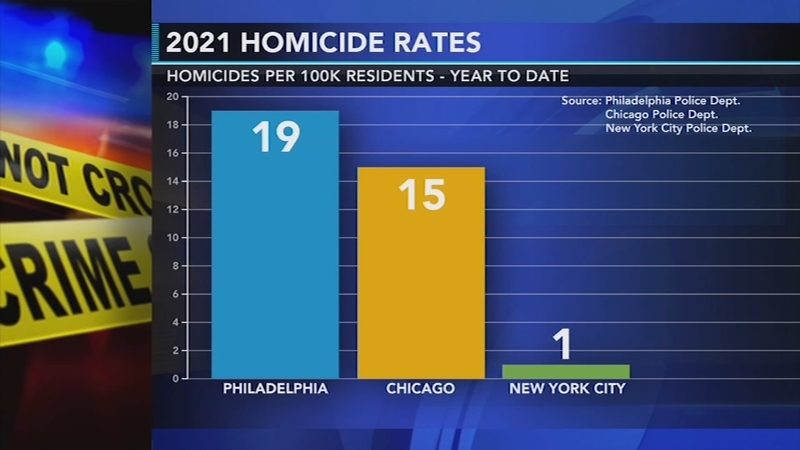 PHILADELPHIA (WPVI) -- Philadelphia Mayor Jim Kenney is defending his decision to not declare a state of emergency as gun violence surges to record levels.

Kenney said the declaration is meant to unlock additional resources, something he says his administration has already done by allocating more than $150 million to the city budget for gun violence, in addition to millions more directed at tackling root causes and to assist community organizations.

"We know residents are afraid. Afraid to attend cookouts or go to basketball courts. Afraid to let their kids play outside," said Kenney during the bi-weekly city gun violence meeting Wednesday.

Just an hour before the briefing, a triple shooting in West Philadelphia left three teens shot, two of them later died from their injuries.

The double fatal shooting was just two blocks from a double shooting Tuesday night that left a pregnant woman injured.

Neighbors who live near those shootings, like Constance Moore, called on the city to do more.

"They need to get to the heart of the problem, where the guns are coming from," asked Moore.

That means 3.5 times as many children have been killed by gun violence in Philadelphia so far this year compared to 2020.

Police say the victims are believed to be around 15 to 16 years old.

Commissioner Danielle Outlaw said, so far this year, they have taken as many guns off the streets as they did in 2020 alone, including ghost guns.

Earlier in the week, Mayor Kenney penned a letter to City Council that he would not declare a state of emergency, saying, "It's not a solution that will demonstrably change conditions."

Philadelphia Councilmember Jamie Gauthier said, "His response that he's already doing all he can provides no sense of comfort to the people in my district that are being traumatized by gun violence."