The men were taken to Lankenau Medical Center to get their breathing checked out, but are not seriously injured.
WPVI
By 6abc Digital Staff and Katie Katro 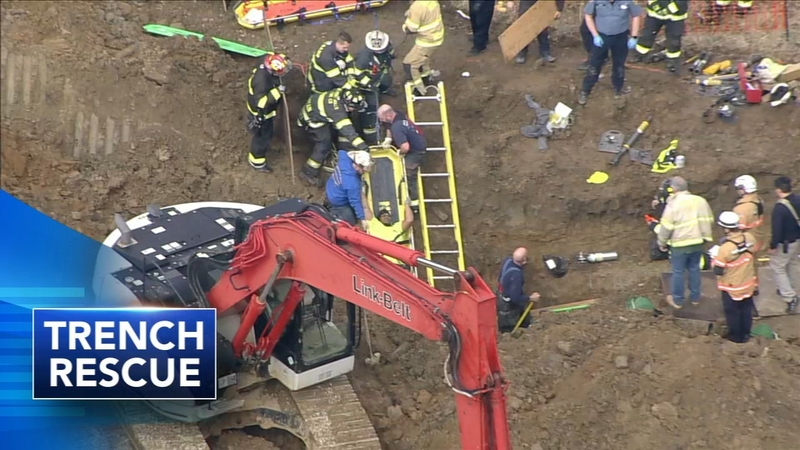 LOWER MERION TWP., Pennsylvania (WPVI) -- Two people were rescued Wednesday morning after a trench collapsed while they were working on the construction of a new home in Lower Merion Township, Montgomery County.

The call came in around 11:35 a.m. for reports of two people trapped waist-deep in a trench at 1221 Mt. Pleasant Road.

It was all hands on deck as crews worked for about 30 minutes to dig the two men out. Officials say one of them was having trouble staying conscious.

"Both these guys were up to their chest in dirt which is why he was going in and out of consciousness because of the pressure on his chest," said Chief Fire Officer Chas McGarvey.

The men were taken to Lankenau Medical Center to get their breathing checked out, but officials said they are not seriously injured.

But now an investigation is underway by OSHA to see what went wrong.

McGarvey said it appears the proper shoring wasn't in place.

"You can get in a lot of trouble for that kind of stuff, but it's probably the first time I've seen it where they've dug this deep and haven't put the proper shoring in place," he said.

Action News reached out to OSHA and they say it will take months to investigate.

We also reached out to the construction company but have not heard back from the owner. There was no word on when construction will resume.