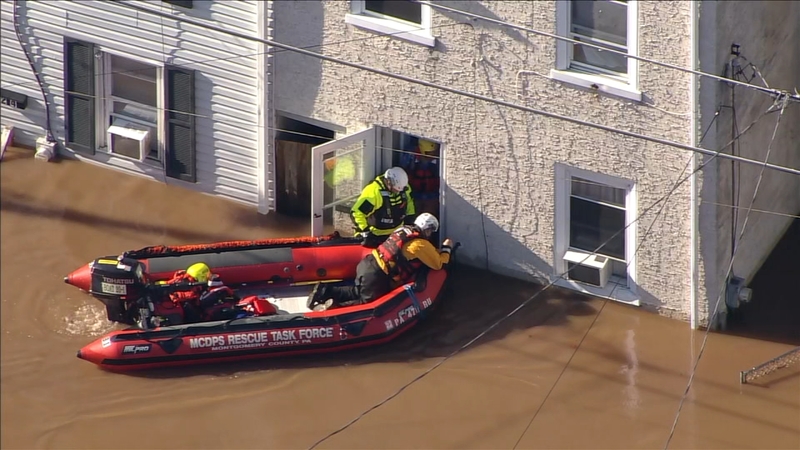 Water rescues underway in Bridgeport, Pa. due to flooding

Chopper 6 was over the area as crews in a watercraft were rescuing people from a home.

The remnants of Hurricane Ida brought flash flooding and destructive winds to the Delaware and Lehigh valleys.

The severe weather moved into the region Wednesday evening leading to 16 tornado warnings. A tornado was confirmed in Gloucester County, New Jersey. Multiple homes were destroyed in the Mullica Hill section of the county. According to Gloucester County officials, two people suffered minor injuries due to the storm.

Daylight shows the devastation caused by a tornado in Mullica Hill, New Jersey.

High winds also brought down trees in Montgomery County, Pennsylvania. A woman was killed in Upper Dublin Township when a tree fell onto a home, authorities said.

The National Weather Service surveyors will be investigating possible tornadoes from Wednesday's storm in Bucks, Chester and Montgomery counties in Pennsylvania; and Burlington, Gloucester, Mercer and Salem counties in New Jersey.

Flooding resulted in major closures across the region Thursday including on the Vine Street Expressway, the Schuylkill Expressway, Kelly Drive in Philadelphia and Route 1 in Mercer County, New Jersey.

Evacuations were ordered in The Island neighborhood of Trenton because of concerns that the Delaware River would flood homes.

Floodwaters were being blamed for at least nine deaths in northern New Jersey and New York City. Passaic Mayor Hector Lora said a 70-year-old man was swept away.

New Jersey Governor Phil Murphy declared a State of Emergency in response to the storm, which allows resources to be deployed throughout the state during the duration of the storm.