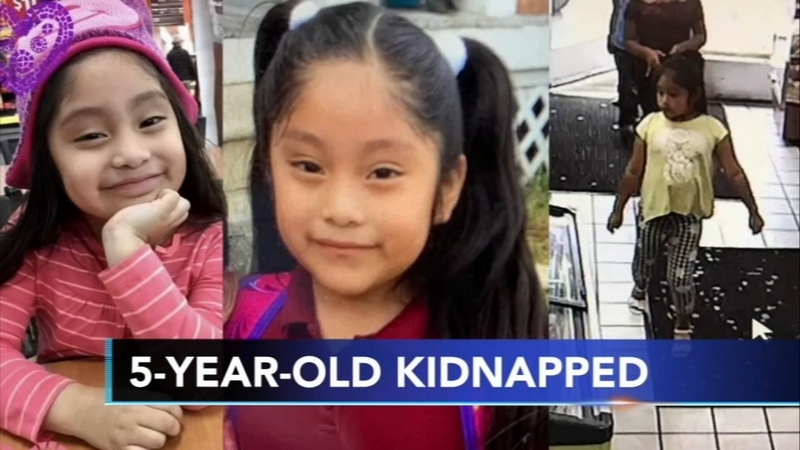 A massive search was launched and an Amber Alert was issued as an all-out effort continues to find the girl.

Here is a timeline of events in this case so far:

Before 4 p.m.
Surveillance video captures the last known images of Dulce. The video shows Dulce getting ice cream at a store with her mother, 3-year-old brother and an 8-year-old relative.

After 4 p.m.
Dulce arrives at the Bridgeton City Park with her relatives. She and her 3-year-old brother run off to play while her mother, Noema Alavez, stays in the vehicle with the 8-year-old relative.

4:20 p.m.
Dulce's 3-year-old brother returns to the car without his sister. Noema Alavez begins looking for her daughter, but cannot find her.

As word of Dulce's disappearance spreads, the FBI and members of the Bridgeton community join the effort to find the little girl.

An Amber Alert is issued shortly after 10 p.m.

In the alert, police say it is believed Dulce was taken by a light-skinned, possibly Hispanic male, roughly 5-foot 6-inches tall. He was believed to be wearing orange sneakers, red pants and a black shirt.

Police say the man led Dulce from the playground to a red van with a sliding door and tinted windows.

Family members issue another plea for help as the search for Dulce continues.

"We have not been able to eat nor sleep. You can't imagine what we are going through. We are very sad. Please help our family. I beg of you."

The family of Dulce Maria Alavez issued a plea for anyone with information to come forward as reported by Dann Cuellar during Action News on September 19, 2019.

As the search for Dulce enters its second week, authorities ask anyone who visited the Bridgeton City Park on the day she vanished share photos and videos they took in the area.

Investigators announce they were able to successfully contact Dulce's father, who lives in Mexico. The FBI said it was working on having agents interview the father face-to-face.

The FBI adds Dulce to its "Most Wanted Missing Persons" list.

Dulce's family releases new video of the child as the search for her passes the 10 day mark.
EMBED More News Videos

Dulce Maria Alavez vanished on the afternoon of September 16, prompting an all-out search to find the 5-year-old girl.

SEPTEMBER 27
A forensics professor at Rutgers University-Camden who is not involved with the investigation offers independent insight into possible scenarios in the case.

SEPTEMBER 30
Speaking while holding one of her daughter's favorite toys, the mother of 5-year-old Dulce Maria Alavez addresses the media saying "I'm worried about my daughter."

OCTOBER 3
"Um, I can't find my daughter," said Noema Alavez Perez. "We were there at the park...and people say that somebody...probably somebody took her."

OCTOBER 4
Despite the efforts of hundreds of police officers and scores of tips, investigators say they still have no strong leads in the search for Dulce Maria Alavez.

Prosecutors say they still need a "key piece" of information as search continues.

The new search groups will start looking for the missing child in and around the park where she disappeared back on September 16.

The FBI place Dulce on its most-wanted missing persons list.

OCTOBER 15
Authorities release a composite sketch of a possible witness in the case of missing 5-year-old Dulce Maria Alavez. An Amber Alert remains in effect for the Bridgeton, New Jersey girl.

NOVEMBER 15
The community holds a vigil for Dulce who has been missing for two months.