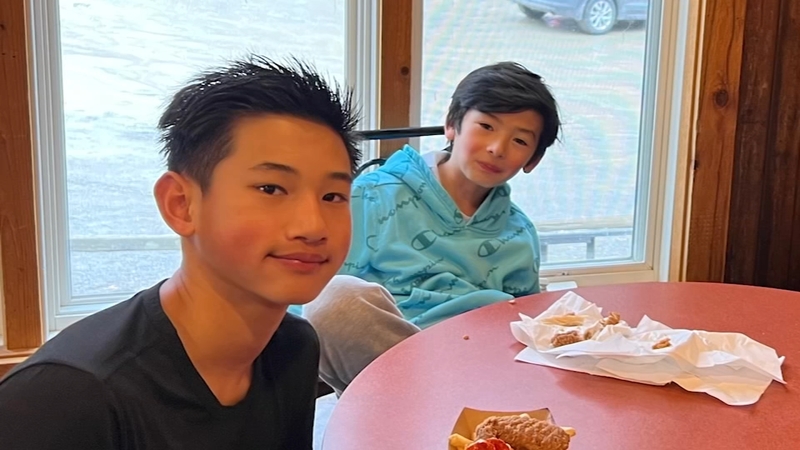 UPPER MAKEFIELD TWP., Pennsylvania (WPVI) -- A Bucks County, Pennsylvania community is rallying behind the family of two boys who were allegedly shot by their mother on Monday.

The boys were found shot in the head inside their Upper Makefield Township home. Investigators say their mother pulled the trigger.

"It's just a tragedy, a human tragedy from every aspect," said neighbor Henry Lieberman.

Nguyen is also charged with trying to shoot and kill her 22-year-old neighbor after she reportedly handed him a box of photos to give to her ex-husband.

Police say when he turned around to face Nguyen, he saw her pointing a black revolver to his face.

He wrestled the gun away from her after it didn't fire.

Nguyen then fled to Washington Crossing United Methodist Church where she was arrested.

Maryanne Heaks works at the church. She spotted Nguyen's van and called police.

"I knew it had to be her. There is just no way someone is going to be sitting in our parking lot for over an hour with the car running," said Heaks. "I feel sorry for her because she's going to have to live with that for the rest of her life. I have to imagine it's going to torment her."

Investigators say Nguyen had ingested narcotics in a failed attempt to take her own life.

The victims have been identified by friends as 13-year-old Jeffrey "JT" Tini and 9-year-old Nelson Tini.

Court records show Nguyen was in an ongoing dispute with her landlord about more than $11,000 in unpaid rent.

On April 18, the judge issued an order informing Nguyen to move out of the home she shared with her children.

Trinh Nguyen, 38, sits behind bars on attempted murder charges while her two young sons, ages 9 and 13, remain on life support.

A vigil was held at the church on Tuesday night.

"They're struggling. They're having a tough time just comprehending what actually occurred," said one parent of their grieving child.

"Just nice kids. We've known Jeffrey since he was in first grade," said another parent.

Officials say the boys are not expected to survive and will give the gift of life as organ donors.