It happened Monday afternoon near Exit 4 of the NJ Turnpike in Mount Laurel, New Jersey.
WPVI
By 6abc Digital Staff 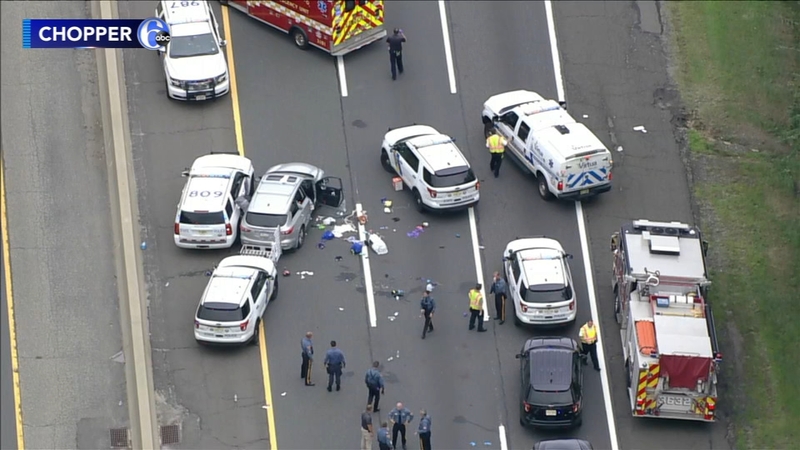 MOUNT LAUREL, New Jersey (WPVI) -- A New Jersey State Police trooper and K-9 were both injured while attempting to apprehend a knife-wielding man following a pursuit on Monday afternoon.

The incident started around 2:13 p.m. when troopers received a report of a shirtless man armed with a knife standing outside of his vehicle on I-295 in the area of exit 28 in Bellmawr Borough.

Police say a chase ensued from I-295 onto Rt. 73 and ultimately onto the NJ Turnpike where the suspect's vehicle became disabled near Exit 4 in Mount Laurel.

Chopper 6 over police investigation on NJ Turnpike near Mount Laurel on August 16, 2021.

Police say troopers used a State Police K-9 to help apprehend the suspect who refused to exit his vehicle. That's when the suspect stabbed the dog and later assaulted a trooper with a flashlight before his arrest, police said.

The K-9 and the trooper both suffered non-life-threatening injuries.

The suspect has not been identified at this time.

The northbound lanes of the NJ Turnpike were briefly shut down while troopers conducted their investigation.