Child, dog among those rescued from flood in Wilmington, Delaware

A rescuer could be seen carrying a small child off the boat.
WPVI
By 6abc Digital Staff 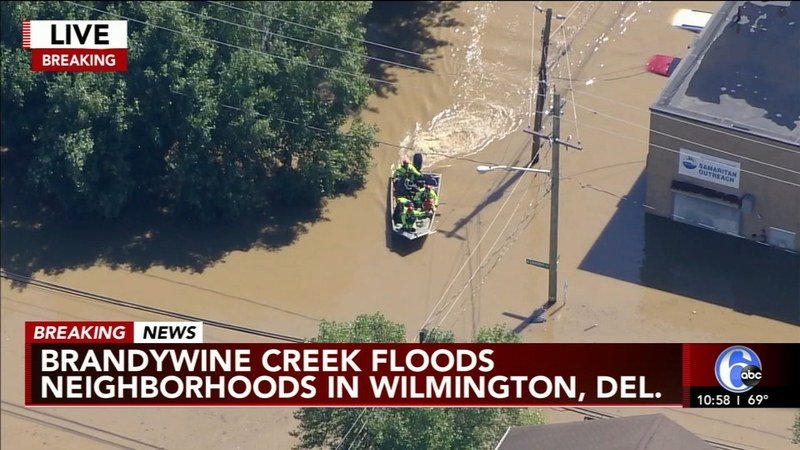 Crews used boats to reach people stranded in their homes after the Brandywine Creek spilled over its banks and into a Wilmington neighborhood.

Chopper 6 was over Governor Printz Boulevard as residents were placed on the boats to safety.

A rescuer could be seen carrying a small child off the boat. One resident was holding on to his dog as he walked through the flooded roadway.

The Brandywine Creek at Wilmington reached 23.14' Thursday morning, with a flood stage of 9'. This is expected to go back below flood stage by Friday afternoon.

The Wilmington Fire Department and other agencies performed more than 200 water rescues.

The remnants of Hurricane Ida brought flash flooding and destructive winds to the Delaware and Lehigh valleys. At least six tornadoes were confirmed in the region.

The severe weather moved into the region Wednesday evening leading to 16 tornado warnings.

Daylight shows the devastation caused by a tornado in Mullica Hill, New Jersey.

Flooding resulted in major closures across the region Thursday including on the Vine Street Expressway, the Schuylkill Expressway, Kelly Drive in Philadelphia and Route 1 in Mercer County, New Jersey.

New Jersey Gov. Phil Murphy says his state's death toll from the remnants of Hurricane Ida has risen to at least 23.

Murphy spoke as his states and others in the U.S. Northeast reckoned Thursday with flooding, tornado damage, and continuing calls for rescue after the storm took residents and officials by surprise.